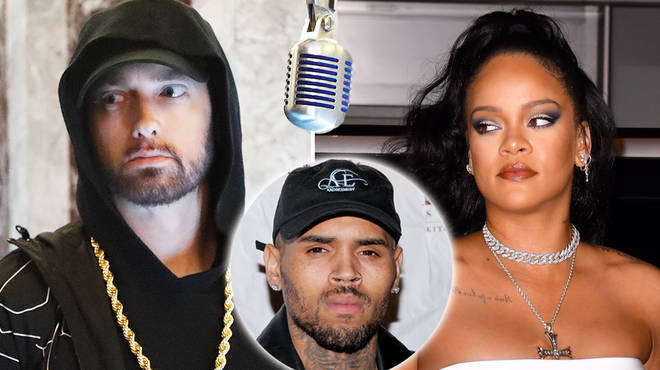 Eminem apologizes to Rihanna for a decade-old leaked song where he says he “sided” with Chris Brown.

Eminem is in all of the headlines this morning. The legendary rapper released his new album last night, coming through with Music To Be Murdered By – Side B (Deluxe Edition). There’s a bunch of stuff to unpack from the new music, including a Snoop Dogg diss at the end of “Zeus”. More noticeably though, the rapper sends a sincere apology to one of his most frequent collaborators, Rihanna, for “siding” with Chris Brown after his 2009 assault of the singer, which he claims in a decade-old leaked song.

In the original leaked track he’s refrencing, Em rapped “I’m not playing, Rihanna, where’d you get the V.D. at?” and also, “Let me add my two cents/Of course I side with Chris Brown/I’d beat a bitch down, too if she gave my dick an itch now.”

Some of Eminem’s most commercially successful songs — read: “Love The Way You Lie” — feature Rihanna. The two have made some beautiful classic records together, but their relationship hasn’t always been chipper. Rihanna likely needed to find a lot of forgiveness in her heart to work with Slim Shady after a leaked song surfaced, featuring Eminem claiming that he “sided” with Chris Brown in the singer’s 2009 assault of Rih. On “Zeus”, Em finally apologizes for the line.

“And wholeheartedly, apologies, Rihanna/For that song that leaked, I’m sorry, Ri,” says Em on the song, in which he also disses Snoop Dogg. “It wasn’t meant to cause you grief/Regardless, it was wrong of me.”

It takes a big man to apologize for his wrongs, especially when they come from over ten years ago. Hopefully, Rihanna appreciates the apology, despite Em’s intent a few years ago.

Eminem apologizes to Rihanna on his new track “Zeus” for the leaked “Things get worse” lyrics.

“And wholeheartedly, apologies, Rihanna
For that song that leaked, I'm sorry, Ri
It wasn't meant to cause you grief
Regardless, it was wrong of me “ – Eminem

Eminem apologizing to Rihanna for the leaked song…I knew he felt bad about it- this is why I Stan this man…his heart ❤️ #MTBMB2 pic.twitter.com/qEjQo1oU0E

I like the fact that Eminem apologized to Rihanna. A real man who has the balls to apologize to a women when they know they were wrong. 👏🏻👍🏻#MusicToBeMurderedBySideB pic.twitter.com/YPAB2tuMFq