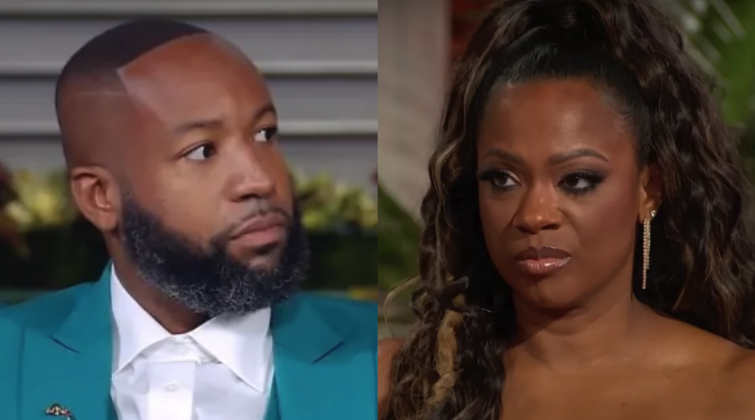 Many assumed Kandi’s issues revolved around him allegedly being involved in Phaedra’s infamous lies about her, but apparently the tea is just a bit more scolding than just that and it ain’t a scheme that Todd set up.

There has been a lot of rumors surrounding the relationship between Kandi Burruss and Carlos King. Both have denied that Carlos had anything to do with the infamous scandal involving Phaedra Parks. But despite this, ‘Real Housewives of Atlanta’ fans couldn’t help but notice that Kandi and Carlos aren’t on good terms anymore. And Kandi confirmed their fallout on her Youtube show “Speak On It.” However, she had more to say in a recent interview with Haus of Aaron.

She said, “My main issue with Carlos is he is the one who stole my group’s life story and sold it to TV One. And for that, I just can’t get past it. He had been working with us that entire season on the “Real Housewives of Atlanta,” that last year he was with us. Him and Todd had already had some little issues, business issues because they were doing a production company together. So they had some things they had dealt with personally. But you know, we were trying to move past that and still work together on the show because he executive produced – what was that – season 9 or whatever and it was his last year?”

Kandi continued, “So let’s say the season wrapped in November. In December, someone tells me…I was talking to a friend. And I was like hey we should do a movie about our life or whatever…it was a director that Todd and I were speaking with. And they were like somebody’s already doing it. I was like what you mean somebody’s doing that? So in my mind, I was thinking it was one of my group members or something. They were like yeah it’s a network that’s already…I took a meeting about directing it. I was like what?”

The timing was insane to her, “Now mind you we wrapped the season at the top of November, right? December, I’m hearing this movie has been sold to a network. So I come to find out a couple of weeks later I’m basically trying to figure out what’s going on. Come to find out it was…oh and sidebar, his other producing partner, one of the producers that worked for him, who was also at the time that I thought was cool, had called my mom and said oh yeah, we wanna interview you cause we wanna do a documentary about girl groups or something. So we wanna ask you questions about Xscape.”

The accusations get messier. Kandi added, “My Mom was gonna do it or whatever but come to find out, he is the person that did a deal with TV One to sell our life story. And was gonna try to ask my mother questions about us to unknowingly get more information I guess for the show. So anyway, I just thought that was one of the lowest things anybody could ever do.”

When Kandi was asked how it was possible for Carlos to get the rights to their story, Kandi clarified that he didn’t.

“He didn’t have the rights to our story. What I found out, cause of course I was calling lawyers and everything. I found out at that time when you’re a public figure, people can do unauthorized stories about you. And at the time we had already done what’s the ‘Behind the Music’ on TV One or whatever? ‘Unsung.’ So they had certain information that I guess they could base the movie off of.”

She continued, “But my thing was, never once even after all of them years we’ve been around each other, he had never once told me that he was trying to do a movie about us. And to go behind my back and to do that…that’s our life story. I was like I can’t **** with him ever again. I did reach out to him at first, he didn’t answer the phone because I had just heard it so I wasn’t sure it was him. So I was calling him like yo, what is this?”

Kandi doesn’t want to ever talk to Carlos again, “He didn’t answer my calls but then when we had did some things to reach out to the network to try to get the whole situation shut down, then all of a sudden he reaches out to me. And I ain’t wanna talk after that. I was like I don’t want to talk to you. I don’t have to ever talk to you again. And that’s just how I feel.”

She got emotional, “I think our spinoff was the first show that he was executive producer for. I literally fought for him to be executive producer of my show, to be the lead executive producer. So to have somebody who you went out for and I always respected him as a producer, to do that to me, I have no respect for him. And so for him to now…every time I turn around, he has something to say about me. I just give him no energy but that right there, my life story, that **** gets me emotional and ****** me off…I don’t have nothing for him.”

Peep the clip below and let us know your thoughts? Was Carlos wrong if this was true?