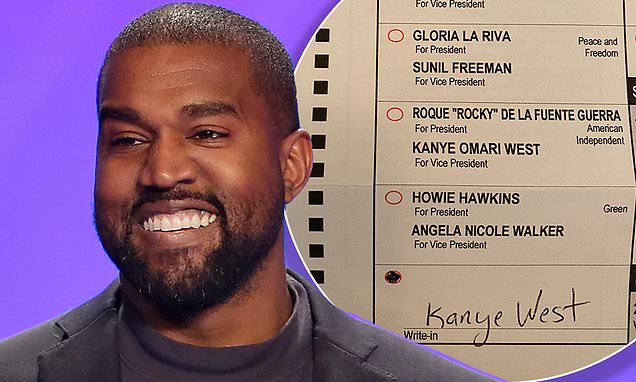 This is almost as bad as these fools writing Hurrambe the gorilla in last go round. Kanye West recently made the claim that some friends are writing his name in on some ballots.

This has been an incredibly weird year for a number of reasons. Perhaps one of the more bizarre stories this year is the fact that Kanye West decided to run for President of the United States. Ye has been very serious about his campaign, even if it hasn’t resulted in many rallies. Regardless, West continues to tout his political aspirations and has been attempting to get on every ballot in the country, ahead of the November 3rd Presidential election. Unfortunately for the artist, West has been left off of a handful of state ballots, meaning his chances of winning anything are incredibly low.

Despite this, some eager fans and friends have been writing in Kanye’s name on the ballot. While taking to Twitter, Kanye even showed off one of these ballots, which clearly says Kanye West written in pen, at the bottom. Needless to say, nothing is stopping Kanye supporters from casting a vote for him.

Friends writing me in 🕊 pic.twitter.com/bC4NvFBWB5

While Kanye was happy about this development, many political enthusiasts were upset with the ordeal. In the eyes of many voters, a vote for Kanye is helping Donald Trump siphon voters away from Joe Biden. This is an election with big consequences for the country, with many feeling as though Kanye is more of a “useful idiot” for the Trump campaign, than a viable Presidential candidate. For instance, one Twitter user said “voting for kanye is like walking up to a roulette table and betting on blue,” while another said “Seriously unfollow me if you’re going to waste your vote on Kanye bc you think it’ll be “funny”. You’re an idiot and don’t even deserve the fucken privilege. Ppls entire livelihoods are at stake and you want to vote for another dumbass?? Fuck outta here.”

You can see the full extent of what people had to say, below.

Seriously unfollow me if you’re going to waste your vote on Kanye bc you think it’ll be “funny”. You’re an idiot and don’t even deserve the fucken privilege. Ppls entire livelihoods are at stake and you want to vote for another dumbass?? Fuck outta here

Kanye West is a piece of shit who not only pissed on a Grammy, but is trying to piss on a US election. Both Trump & Kanye expose America's desperate need to increase mental health. pic.twitter.com/N1fCrU0EF5

If you actually vote Kanye: may your coffee never again be to your liking and your mixed drinks always too watered down to enjoy. pic.twitter.com/8J43QpdbLn

Please DON'T vote for Kanye. This election is too important! https://t.co/LQZc9bv7SO

i can’t believe so many people are voting for kanye… i hate stupid people pic.twitter.com/jqylP7Dazz

DO NOT WRITE IN KANYE. A WRITE IN FOR KANYE IS A STRAIGHT VOTE FOR TRUMP. https://t.co/G48y2Uf5Sq

Don’t..chu.. take your raggedy ass out there and vote for Kanye. Dontchu do it! pic.twitter.com/NGNLa1BHBO