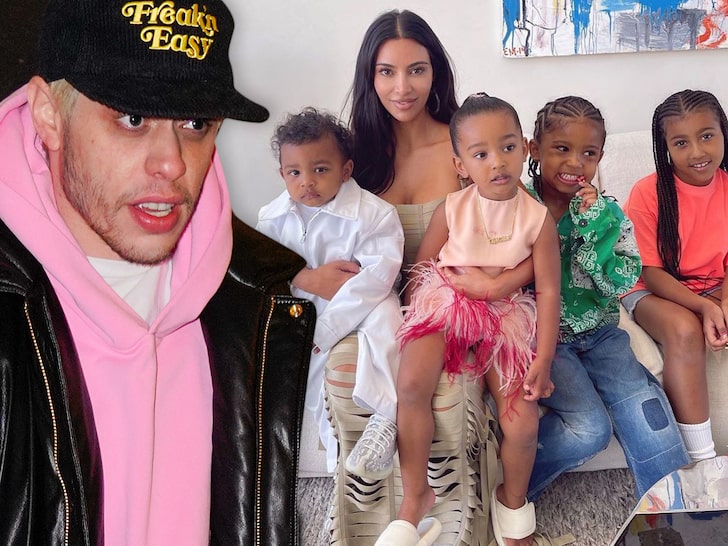 Now, I don’t know if that’s what the tattoo says or not but I hope not. Granted, it’s always dope to see a man step up and care for his woman’s children as if they’re his own..but Kim and Pete have only known one another for a few months, those aren’t your damn kids.

Despite everyone still scratching their heads wondering how, Pete Davidson and Kim Kardashian appear to be getting more and more serious. Shortly after making their red carpet debut at the White House Correspondents’ dinner, Page Six reports that the comedian was spotted with what looks like some new ink dedicated to his girlfriend (and maybe even her kids).

Pete was photographed leaving the Fonda Theatre in Los Angeles over the weekend, where paps spotted a teensy tiny mark on his neck that seems to read “KNSCP.”

It’s entirely possible that the five letters could have a meaning completely unrelated to his romantic relationship, but on social media, many have been speculating that they stand for the first initials of Kim and her four children – North (8), Saint (6), Chicago (4), and Psalm (2).

Page Six reached out to both Davidson and Kardashian for comment but didn’t hear back in time for publication. Of course, knowing the fact that the Saturday Night Live performer already has ink in honour of his lady, I wouldn’t be surprised if the rumours are confirmed.

Previously, the 28-year-old got a piece reading “My Girl Is A Lawyer,” which the mother of four revealed on The Ellen Degeneres Show is her “favourite,” calling the gesture “really cute.”…choices.

Take a look at the tattoo as well as some reactions below and let us know what you think. If that is what it says…is this appropriate?

Pete Davidson is weird af for getting that tattoo if those are legit initials.. pic.twitter.com/CckANcEQVw

So Pete Davidson has this tattoo that says KNSCP which the world is saying it represents Kim & her kids (Kim, North, Saint, Chicago, & Psalm). Now all I’m saying is he’s a weirdo if this true cause first of all they haven’t even dated a year yet, but also these not your kids🥴

At this point, I think Pete Davidson probably has a tattoo dedicated to everyone