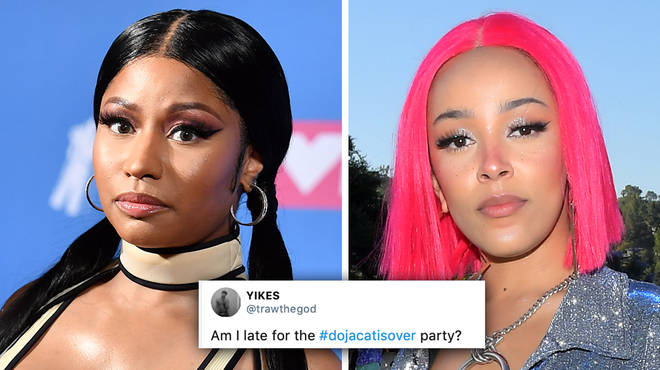 After facing the wrath of irrational Nicki Minaj-Stanning Barbz, Doja Cat took to Beats 1 to clear the air about the misunderstanding gone awry.

Though Doja Cat has seemingly become a master of social media, like most of us, her relationship with it proves to be somewhat annoying at times. As she tells Zane Lowe, she believes Twitter to be “a cesspool and the worst thing that ever was created,” a conclusion no doubt fueled by a recent scuffle she found herself inadvertently thrust into. You may recall last week when an army of Barbz picked up their pitchforks and deemed it high time to cancel Doja’s name (which obviously didn’t work as she just scored her first Top 5 hit), all because of a single misunderstanding gone awry.

Today, Doja took some time to chop it up with Zane Lowe on Beats 1, where she explained her side of the story. “Okay, so there’s someone who’s verified on Twitter and they’re not even a stan account or anything,” she explains. “They’re just some random guy who was just, he saw this art that someone drew of me, Nicki and Meg, in that order. So Nicki was in the middle and it was a Rolling Stone cover, but Nicki was in the middle, rightfully so. Meg was on the right and I was on the left and this guy commented, “I’d like to see Doja in the middle.”

After his comment promoted major backlash from a gaggle of forever-offended Barbz, Doja felt compelled to step in and defend him from the cyberbullies. “I say, “Dude, stop responding to these people,” she continues. “They’re scum. They’re so awful. Stop talking to them. They have nothing good to say to you or anybody else.” So anyway, I’m standing up for this guy and then I’m just getting upset with everybody. And then I said, “These people are idiots. They’re children, they’re scum.” Because they were, those five people are scum. They suck. They literally suck. They don’t even know who they are.”

“And basically, so then people started spinning it, of course, because that’s the internet,” explains Doja. “They start spinning it that I’m talking about every single person who likes Nicki Minaj when they don’t even know I’m the biggest Nicki Minaj fan. So they’re stupid. They don’t even know me. So they’re saying things that they have no idea what they’re talking about. But that’s basically how that panned out.”

For more from Doja, including her early days following underground rappers like Aesop Rock, Atmosphere, and Immortal Technique, check the entire episode of At Home With Zane Lowe.