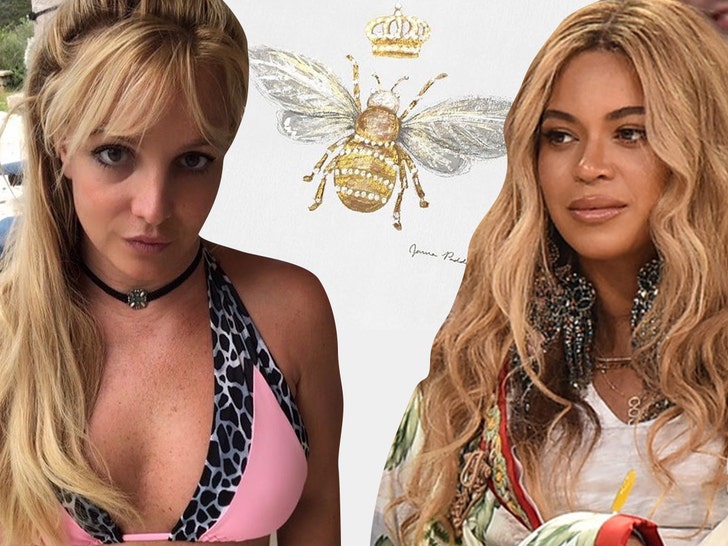 Britney Spears shared a photo of a bee with a crown to her Instagram page, and Beyoncé’s BeyHive were swift to respond.

In pop culture, Britney Spears is the gift that keeps on giving. Her antics may seem strange, especially on social media as she dances, does yoga, or spouts random messages to her admirers, but her fans continue to go the distance in showing Britney Spears support, which through it all, who could blame them? Spears is legendary. They protest in the streets with signs, they cry on camera in viral videos, and they make sure that the Grammy Award-winning pop star knows that she’s loved. However, Beyoncé fans had a bone to pick on Wednesday after Britney referred to herself as the “Queen B.”

Today I put my favorite white top on …. ran outside …. took my shoes off in the grass and realized that imagination is more powerful than knowledge ??????!!!!!

We’re not sure if Briney Spears was doing a bit of trolling or if she truly was sending an innocent shoutout to herself, but she shared an illustration on Instagram hours ago that has become the talk of social media. The photo is the image of a bee with a crown, and in the caption, she wrote, “To all my fans who call me Queen ? B …. I believe this would be more accurate ????? !!!!!”

The Beyhive had an issue with this one, considering Beyoncé has been known as Queen B for quite some time, and Lil Kim fans chimed in, as well, considering the legendary rapper donned the moniker before both women. The artist who created the work Jenny Paddey, released a statement to the folks over at TMZ where she says neither Britney nor Beyonce was her inspiration.

Jenny shares she painted the illustration in 2018, and it was only intended to reflect a play on words for the phrase, “queen bee.” She says she’s not sure how Britney came across her work — she does sell prints on her website — but only found out about the IG post when friends started tagging her in comments.

In everyday life, none of this truly matters to regular folk, but to those who call themselves stans of both ladies, the ongoing social media battle is a big deal. It’s became a trending topic on Twitter as hilarious memes ran rampant, so check a few of them out for yourself.

So Britney Spears said y’all been referring to her as the Queen B… And i just wannna know …. pic.twitter.com/LC7A9woatE

So we just gon forget the fact that Lil Kim was the first Queen B? pic.twitter.com/Be82b1hdqo

Why Britney Spears trying to calm the title “Queen B” ? pic.twitter.com/h05U9WwUC2

britney spears just said fans call her “queen b” as if that ever happens. imagine ariana grande saying “for the fans who call me the queen ? of soul. this is for you ?” pic.twitter.com/4dYVWcjbOK

*The BeyHive calling Beyonce Queen B*

britney is about to start a civil war with this queen b ?? pic.twitter.com/EFFPNvOIKF

I'm not gonna involved on this stupid trend who's the Queen B should be but from what I see the other fandom showing their true color I mean their racist side appeared pic.twitter.com/XKpMII7gNi

The only person with the title Queen B is Beyoncé herself, some ppl r delusional? pic.twitter.com/YrAeUdlwZJ

Britney when asked who the Queen B is pic.twitter.com/QUL9l1Y10J