Somebody must’ve asked Rih about that damn album.

The annual Pre-Grammys Roc Nation Brunch was held on Saturday afternoon as per usual, and the event boasted some pretty huge stars and some pretty big surprises. One attendee fell into both of those categories, as Ms. Rihanna herself decided to make an appearance at the lavish gathering, gracing the industry’s elite with her increasingly rare presence. As we know, Rih has become known more as a makeup and fashion mogul than a musician these days, so her sighting at one of the music industry’s biggest events of the year was a shock to many unknowing fans. While Rih smiled and posed happily with the likes of T.I., Megan Thee Stallion, and DJ Khaled, the Bad Gal seemed less than thrilled when she was spotted having a conversation with one attendee, Jim Jones’ fiancée and Love & Hip Hop star, Chrissy Lampkin.

In the brief clip, Rih is seen with her arms firmly crossed, speaking firmly to Chrissy about…something. It’s difficult to tell what the two ladies are discussing, but based on Rih’s body language and pissed off expression, it doesn’t look good. It appears as though Rih is yelling “I don’t f*ck with that” near the end, but WHAT exactly does Rih not f*ck with? Per usual, the internet immediately starting coming up with their own narratives of what was going on in the video.

Many flooded with comments with jokes about Chrissy asking Rihanna where her long-awaited album is. Others took it a step further, adding that Rih had answered the question by indicating that the album will arrive once Chrissy and Jim actually tie the knot, as they’ve been engaged for practically an eternity. Whatever the case is, Rih definitely seems to be cussing someone out and venting to Chrissy out for some kind of misdeed (or maybe she was giving her passionate opinion on the latest happenings of ‘Love & Hip Hop’) either way, somebody may need to sleep with one eye open around the badgal. Take a look at the some of the internet’s hilarious accounts of what may have been happening below. What do you guys think?

Mona Scott better get the cameras ready. Rihanna about to swing on Chrissy. 😭😭😭😂😂 #RocNationBrunch https://t.co/DdPUIzG5vI

It looks like Rihanna is pissed off with someone and venting to Chrissy. “Fuck her” clearly someone at the party upset her

Chrissy might be bad vibes bro. We never heard Rihanna say shit at an event. And here come Chrissy in her Avirex jacket stirring the pot. #RocNationBrunch 😂

Rihanna: I hope no one asks me about that damn album release today 😩

Chrissy Lampkin: girl when is that album coming out? 🤔

I need to know who Rihanna and Chrissy was talking about. And who she don’t fuck with 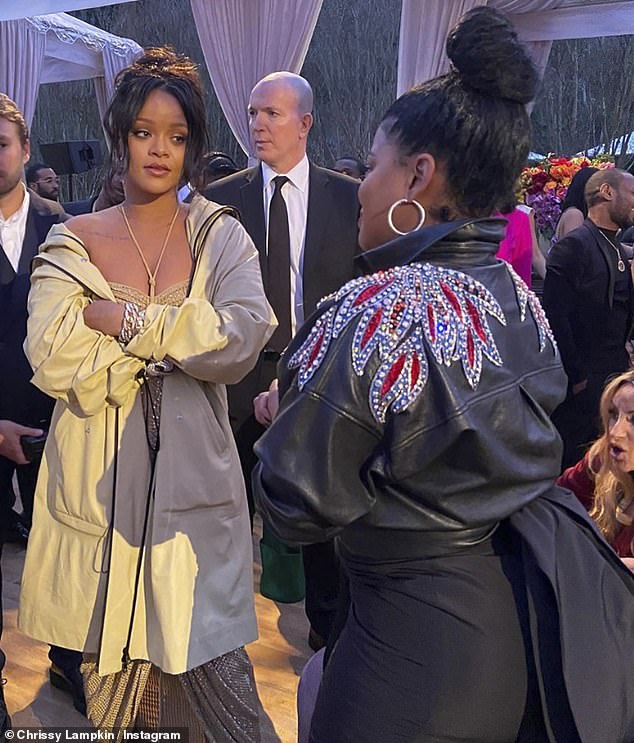