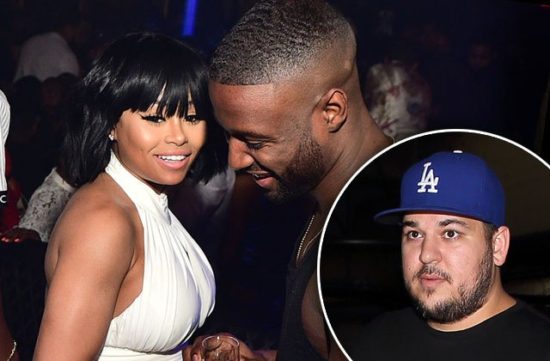 Just as it seemed the public was beginning to warm back up to Rob Kardashian a bit, it seems we’re walking into a big old mess of “don’t hold your breath.” A recent investigation by the Los Angeles Police Department reportedly turned up Kardashian’s threats to model Pilot Jones, and they’re both racist and homophobic. Last week, TMZ reported that pictures surfaced of Jones kissing Blac Chyna, who’s currently expecting Kardashian’s kid. It’s not known when the pictures were taken, but Kardashian was not happy about it. Instead of taking a few deep breaths and talking things out like a grown up, the Rob & Chyna star instead allegedly let off quite a few outrageous text messages.

Rob and Chyna are obviously under the impression that Jones leaked the photos, sort of insinuating that he might be the father of Chyna’s baby, which we all can agree is totally messed up. However, as mentioned, Kardashian did not take it lightly. TMZ got a hold of some of the texts, alleging that the rest of them are also homophobic and reference Mexicans and African-Americans. Some of Rob’s creative writing included these messages:

— “And u fa***t ass bitch this is ROB and u did the most DISRESPECTFUL s**t ever by releasing pics and a story to a pregnant Woman who is 17 days from having a baby!”

— “This is my Wife and you about to get your ass beat by every Mexican in LA including me.”

— “I hope you religious cuz after I beat your ass with about 30 Mexicans u better hope God lets u into heaven.”

— “Don’t ever come for me and my wife ever U corny ass n***a” … and that’s followed by a bunch of black fist emojis.

He also allegedly added more threats of a serious beatdown followed by black fist emojis so Jones would know he was really serious. Chyna also got in on the name calling. After the photos were leaked, she wrote in an Instagram caption, “So JC Pilot Jones whatever the fuck his name is has already tried to put out a story saying that he’s the potential father of my child really Nigga ?!?!?! Let me start off by saying this young man Is “GAY” !!!”

She added that the pictures of them kissing were totally staged and were taken to send to Jones’ boyfriend to make him jealous. She also claimed that the pics were taken “over two years ago.” In all caps, she claims to have “NEVER EVER” had sex with him, also addeding an email allegedly from Jones in which he’s trying to extort $150 million from her for the pictures.

Kardashian is now under investigation for criminal threat, and whatever actually happened, it’s pretty clear things got way, way out of hand. Extorting someone is awful. Threatening to kill someone instead of going to the cops to report extortion is just as bad. And if your head hurts like mine just from putting this story together then you should agree with the moral to all of this…Everyone needs to calm the hell down because, in case they both forgot, they are about to bring a new life into this world. Let’s just get it together, people. For the kid.