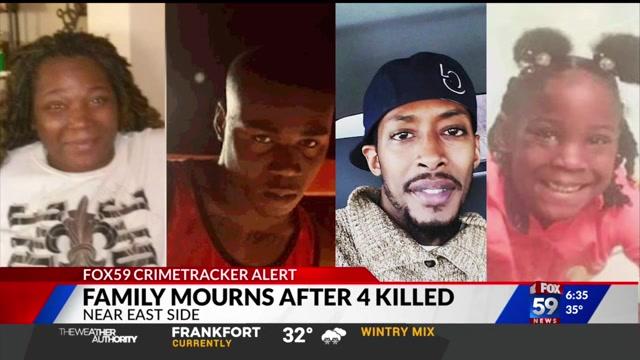 Are people really out here taking lives for $1,400? This family of the victims, including a child, say the argument that promoted the violence was over a stimulus check.

As the COVID-19 pandemic continues to plague the United States, MoneybaggJo Joe Bidden, and his administration finally came through on his promise in blessing the American people with another round of stimulus checks. While not the original $2,000 promised, people are still very much satisfied with the adjusted amount of $1,400, becoming the subject of hilarious memes across social media as people flexed the things they would cop with their newfound riches. Unfortunately for one Indiana family, however, an argument over a stimulus prompted 25-year-old Malik Halfacre to commit a quadruple homicide.

About a day before Halfacre allegedly shot the mother of his child Jeanettrius Moore and murdered four other members of her family– her young daughter, brother, mother, and a cousin, according to relatives, Halfacre wanted half of her $1,400 stimulus check.

Moore’s cousin Wendy Johnson told local news station WXIN, “He wanted some of Jeanettrius’ tax money, stimulus money. She said, No, you don’t deserve any of this. I work. I take care of our child. You don’t do anything.”

A quadruple murder over a stimulus check. You know the state of poverty and mental health in America is bad when families are killing each other over a $1400 check.

*kill your child’s mother’s other child.

Moore instead offered him $450, offering him a “take it or leave it” ultimatum, Johnson recalled. “He said, I’m gonna get that money,” Johnson said. “This was the day before.”

He returned to the home later, going through Moore’s purse searching for money. Daquan Moore tried to intervene to help his sister, prompting Halfacre to start “killing everybody,” Johnson explained.

Relatives identified as the victims of the violence as Moore’s 7-year-old daughter Eve, her 23-year-old brother Daquand Moore, her 44-year-old mother Tomeeka Brown, and her 35-year-old cousin Anthony Johnson. “He shot Daquan first,” Wendy Johnson said. “He shot Anthony. He turned around, and he shot my auntie Tomeeka. My aunt Tomeeka said, ‘Malik!’ and he shot her again.”

Investigators also reported Halfacre fled the scene with his 6-month-old daughter, Malia Halfacre, triggering an Amber Alert. Jeanettrius Moore was shot in the back and survived the incident, flatly told neighbors what had happened after being shot.

Our prayers go out to Moore and her family during this time.

That quadruple murder over this stimulus check is heartbreaking. There’s so many unfortunate layers to that story. No way that money of this amount should lead to this type of outcome.

A senseless quadruple murder happened in my city over stimulus money. Sick and weird af. RIP to the lives we lost