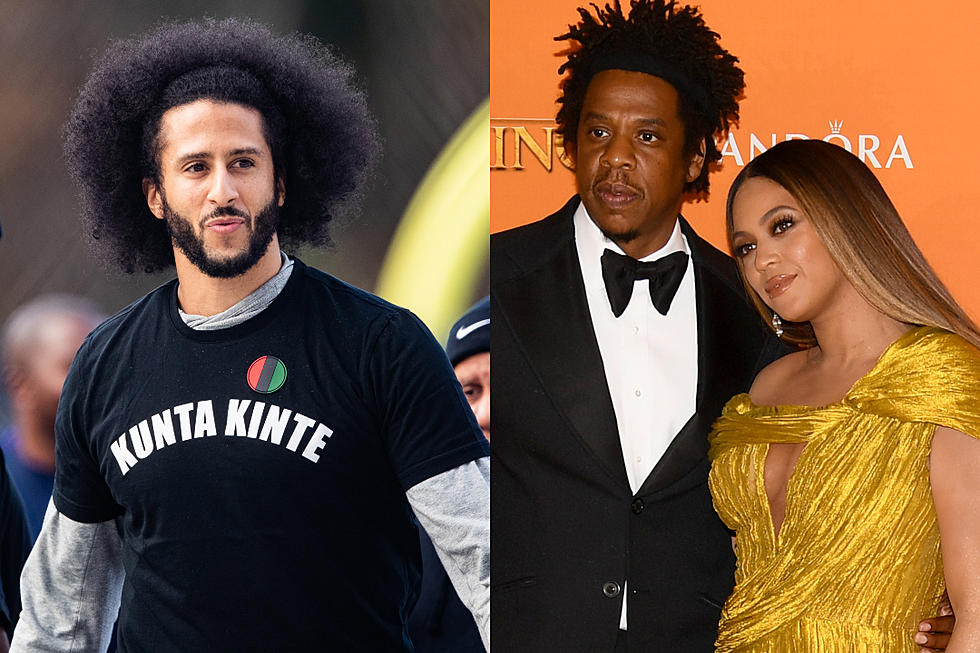 Kaep is still skeptical about how much change Jay can enact from within enemy territory.

While one could have predicted that Jay-Z and Beyoncé remaining seated during the national anthem at the Superbowl would draw criticism from conservatives – as it did from Tomi Lahren – Colin Kaepernick not siding with the Carters comes as a bit of a surprise. Kaepernick spearheaded the NFL’s kneeling-during-the-anthem movement and paid the price for it. Since Jay-Z holds himself to be an advocate for social justice initiatives, he received backlash when his entertainment company, Roc Nation, partnered with the NFL following its ostracism of Kaepernick.

Jay-Z and Beyonce sat during the National Anthem at the #SuperBowl pic.twitter.com/Cxj2RNF1xX

This could explain why Kap is now expressing skepticism about Jay and Bey’s move at Sunday’s big event. In a press conference held after the Roc Nation-NFL deal was announced, Jay-Z stated that protesters “passed kneeling” as a means of communicating their discontent with race relations in America. “I’m not minimizing [protests] because that has to happen, that’s a necessary part of the process,” Jay explained. “And now we all know what’s going on. What are we going to do? How are we gonna stop, because the kneeling was not about a job, it was about injustice. Let me bring attention to injustice. Everyone’s saying, ‘How are you going forward if Kaep doesn’t have a job.’ This wasn’t about him having a job. That became a part of the discussion. He was kneeling to bring attention to injustice. We know what it is. Now how do we address the injustice?”

On Monday, Kaepernick reposted an Instagram Story that suggests he’s still unsure whether Jay is truly in his corner. The story initially shared by podcaster Miko Grimes is a screenshot of a TMZ article reporting that the Carters didn’t rise for the anthem. Alongside a thinking face Bitmoji, text on top of the photo reads, “I thought we were ‘passed kneeling’ tho?”. It seems Kap doesn’t believe that Jay can make the necessary institutional changes through his partnership.

Before the Superbowl, Jay doubled down on his argument that new measures need to be taken to enact change, even if he supports Kaepernick’s mission.