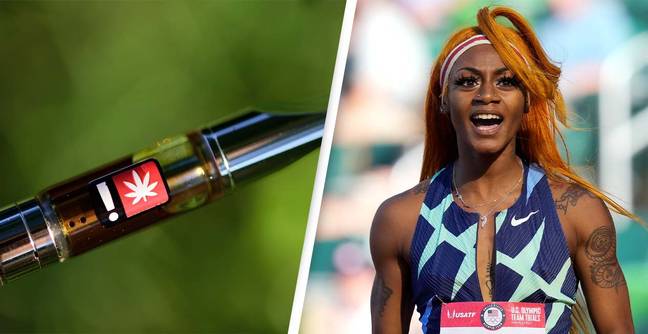 Would this be a smart endorsement or a bad move? Apparently a vape company thinks Sha’Carri Richardson would be a perfect ambassador for their cannabis products.

Sha’Carri Richardson has been all over the news because she smoked weed in a state where the plant is legal. The fastest woman in the world was disqualified from competing in the Olympics after she tested positive for THC. Fans have been throwing their support behind her, along with other celebrities and athletes who feel like she should’ve been representing Team USA at the 2021 Olympics.

While one door closes, another one opens, and it seems like there’s at least a bag on the table for her following her admitted cannabis use. TMZ reports that Dr. Dabber, a THC vaporizer company, has extended a 6-figure invitation to Richardson to join their team as a spokesperson. The company sent a letter to the athlete to pitch the idea and said that they would offer her $250K to be an ambassador.

“At Dr. Dabber, we believe that THC can actually have many positive effects on an athlete’s recovery and overall mental wellbeing,” the letter reads. “Considering your talent and grace over these past weeks, we would love to offer you the opportunity to work with our team as a spokesperson for Dr. Dabber. This entails testing our award-winning dab rigs and vape pens as a resident ‘doctor.'”

There haven’t been many details surrounding what would be included in their partnership with Richardson.

No word on whether she’ll accept the position but Dr. Dabber is apparently in need of a new spokesperson after dropping Kyle Massey due to his recent legal issues. (We’ll get into that later). Do you think Richardson should say yes to this deal? Personally, y’all know I’m all here for a little bit of weed but in Richardson’s current situation, I think this could be counter productive and she’ll earn so much more by staying on course in the long run.