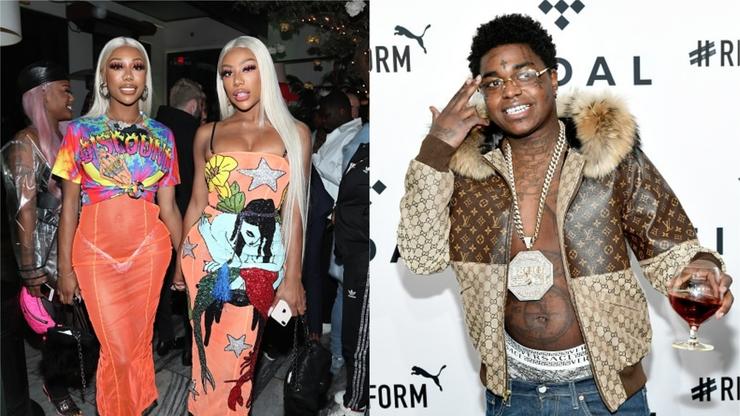 While I do think the inspiration may have been a bit obvious, I highly doubt that Kodak Black couldn’t afford the Clermont Twins when all their John’s do.

One thing about the Clermont Twins, they have never been ashamed of letting us know exactly who think they are. “Who are we? We are that b*tch”.. or whatever they said. The twins recently called out Kodak Black after believing he settled for look-a-likes of them in his latest video release. Kodak recently celebrated his 24th (it’s hard to believe he’s only 24, right?) birthday and kicked off the celebrations with the Happy Birthday Kodak EP, a four-track project with appearances from Jacquees, Yo Gotti, Lil Keed, and Rylo Rodriguez.

Alongside the release of the EP, he debuted the video for its second track “Feelin’ Peachy.” The colorful video lives up to its name, showing the Pompano native rocking a bright matching set, and of course, tons of beautiful women. Two twin video vixens particularly caught everyone’s attention for their uncanny resemblance to The Clermont Twins. After catching wind of the buzz, the duo took to Instagram to directly address Kodak.

“Nah whew lmao if we wasn’t in the budget just say that,” wrote the duo on their joint Instagram page over a photo of the look-a-likes reshared to their story Saturday (June 12). The doppelgangers in question appeared to have the same aesthetic as the Clermont Twins, from the blonde hair, the oversized shades, and their sculpted frames.

“It’s getting weird,” they added in another story post. “What you bought vs. what you get [laughing face],” they continued to clown in another post. “Or is it what you want vs. what you can afford?” From the looks of it, the twins make a pretty compelling case regarding the imitation.

Take a look at the accused look-a-likes and let us know if your thoughts. Also, be sure to check out the “Feelin’ Peachy” music video to see the copycats in action. Do you think this was a justified reaction by the Clermonts or were they doing a bit too much kinda like when they attacked The City Girls over a pose a few weeks ago?