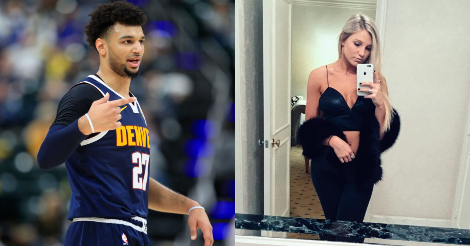 Denver Nuggets baller Jamal Murray apologizes to fans after a video was posted to his Twitter of his girlfriend sucking his little nugget.

Jamal Murray sent out an apology to fans Sunday morning after learning that his Instagram account had been hacked over night and released some NSFW-videos. “First and foremost I would like to apologize to my fans,” Murray tweeted out. “My account has been hacked, currently working on the issue. Thanks.”

First and foremost I would like to apologize to my fans. My account has been hacked, currently working on the issue. Thanks 🙏🏽

After fixing the hack, Murray decided to deactivate his profile to try and clear everything. Although the footage was removed off his profile, people were still able to grab the video and other posts before they were deleted. This led his girlfriend, Harper Hempel, to ask them to get rid of the clip.

If you have the video please delete it

Following a NSFW-leak like that however, fans had a field day on Twitter, sharing their reactions & hilarious memes online which you can see for yourself (below). Check them out.

Jamal Murray telling everyone to delete the video when everyone has seen it pic.twitter.com/hvD0Nweiko

Jamal Murray apologizing to the NBA this morning pic.twitter.com/4MrZdmAH6g

Jamal Murray when he tries to go into the next nuggets practice: pic.twitter.com/IpudHOEnXy

“He deleted his IG story in quite the HURRY, ladies and gentlemen it’s JAMAL MURRAY!” pic.twitter.com/ilYV8hgHfY