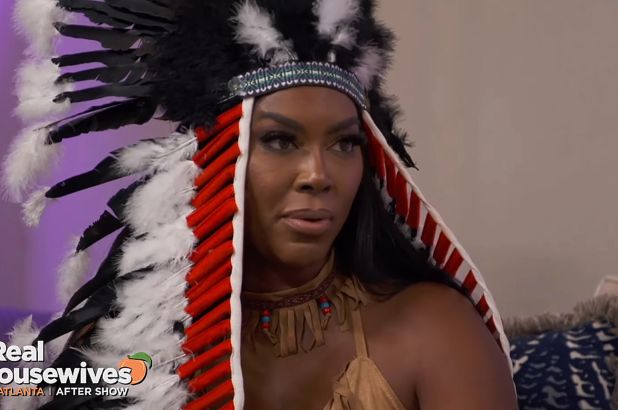 Another day, more outrage..this time Kenya Moore is seeing quite a bit of backlash at the hands of “cancel culture.”

Real housewife Kenya Moore, known for her fun and often shady personality, is in some hot water after her appearance on the show’s Halloween episode. Dressed in what she referred to as a “warrior princess,” Moore wore a feathered headdress and fringed dress which led to fans accusing the reality star of cultural appropriation. While she didn’t seem to notice that her costume made her castmates (and fans) cringe, the other women of the show made their feelings known in their confessionals.

RHOA newbie Drew Sidora called Moore out in her confessional, saying, “Kenya’s Native American costume is super problematic but I ain’t trying to ruffle no feathers for this girl’s trip…it seems like I’m the only one who sees the issues with Kenya Moore’s decisions.”

Porsha Williams, who has had a roller-coaster relationship with Moore, also used her confessional to talk about Moore’s questionable costume decision. She explained to the audience, “She is a Native American warrior. I thought we weren’t doing that no more. I knew that this girl was crazy, but add lame to the list, add wack to the list.” Of course, the conversation didn’t just stop at one episode. The ladies also broke down the look on Bravo After Show.

Williams doubled down on her stance on Moore’s costume in the after show, saying, “Someone was dressed fully, head to toe, in cultural appropriation. How many times they gotta ask us not to wear that? How many times? Head to toe, just drippin.’”

Kandi Burruss, however, came to her costar’s defense during the after show, insisting there was no malicious intent behind it.

Kenya Moore coming to a party dressed as a “Native American” is probably the most disgusting thing I’ve seen on Housewives since Monique Samuels did it a couple seasons ago. Do better. #RHOA
Sincerely; an Indigenous African-American woman. 🥰

Fans quickly called Moore out on Twitter, rightfully disappointed in the reality star.

One fan wrote, “Kenya Moore coming to a party dressed as a “Native American” is probably the most disgusting thing I’ve seen on Housewives since Monique Samuels did it a couple seasons ago. Do better. #RHOA Sincerely; an Indigenous African-American woman.” While Moore didn’t respond to any of her castmates, she did tweet seemingly in her own defense. She wrote, “Also part of my heritage #RHOA,” responding to a fan who called her out for the insensitive costume.

Appearing on Watch What Happens Live with Andy Cohen, Sidora once again commented on Moore’s look. Sidora revealed to Cohen, “No one said anything…I think we talked about it afterward, but I was stunned.”

On Monday, Bravo issued an official apology for Moore’s costume and how the network handled the episode.

“Bravo aims to have the highest standards of respect and inclusivity and we recognize that the recent episode of The Real Housewives of Atlanta, in which a cast member wears a Native American costume, did not uphold those values,” the statement read.

“We had hoped it would provide a teachable moment, however in retrospect, it is clear that the network did not address this properly given the gravity of the situation. We apologize to both the Native American community and our audience as a whole.”

Take a look at some of the responses below. Do you think Kenya’s costume was in bad taste?

In 2021…Kenya Moore doesn't know that wearing a Native American headdress as a damn costume is offensive???? On GAWD….. SHE MAKES ME SO TIRED!!!!😫😑. #RHOA

Kenya Moore: I don't want to be disrespectful…
*shows up in full native American headress* pic.twitter.com/6gVZclH0or

If any white housewife wore a “native American” costume they would be “cancelled” in a heartbeat. Why is it ok for Kenya Moore to wear it? I hate fake wokeness.