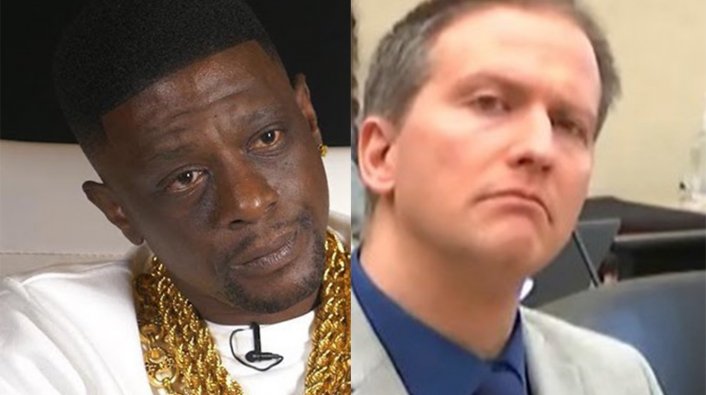 One thing about Boosie, he is going to find a way to bring up some d*ck and/or someone being gay.

Like…why was THAT your first thought? Whenever there is a polarizing pop culture or political moment, undoubtedly, Boosie Badazz is going to let his opinion be known. The Louisiana Rap icon often gives his takes on viral news that has flooded social media platforms, and like several others, he weighed in on the Derek Chauvin verdict. The disgraced former police officer was found guilty of second-degree unintentional murder, third-degree murder, and second-degree manslaughter, and as activists breathe a momentary sigh of relief, others are focused on the police-involved shooting death of 16-year-old Ma’Khia Bryant.

On Twitter, Boosie was satisfied with the outcome of the Chauvin trial but also gave his take on why the former officer should be happy he was in Minnesota and not in the Bayou State.

“He lucky he ain’t going to jail n LOUISIANA [two eggplant emojis] #bosscallwouldabeenmade,” the rapper tweeted. Boosie didn’t offer up any other explanation to his message, but those who know what he was referring to didn’t need to ask. Those who didn’t catch Boosie’s context quickly learned with the help of the internet and soon, those Badazz memes began flooding Twitter as the internet began to clown the rapper.

Check out Boosie Badazz’s tweet along with a few jokes below. I’m just trying to figure out why Boosie talks about the d*ck more than I do.

He lucky he ain’t going to jail n LOUISIANA 🍆 🍆 #bosscallwouldabeenmade

Boosie prolly reading the TL like “I THOUGHT EVERYBODY WANTED EVIL SHIT TO HAPPEN TO THIS NIGGA” pic.twitter.com/Ti8ll9SzQB

Boosie is gay. That nigga be way too invested into the happenings of gay folks.

Boosie be bashing gay people. Then be talking about gay stuff all the time. I’m like…. pic.twitter.com/Q48XPmYLS1