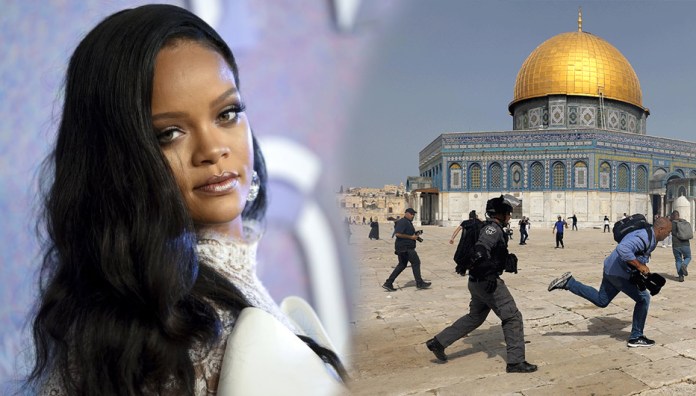 The singer shared that her “heart is breaking” & “I stand with humanity” before facing critics.

Gal Gadot recently faced an onslaught of backlash after she tweeted her concerns regarding the ongoing Israel-Hamas conflict, and Rihanna has faced a bit of it herself. In recent weeks, there has been increasing awareness regarding the airstrikes between Israel and Palestine as supporters of both sides have taken to social media in real-time to post updates. Rihanna surfaced on social media yesterday evening (May 12) where she shared that she was distraught over the distressing news of innocent people dying in the crossfire.

“My heart is breaking with the violence I’m seeing displayed between Israel and Palestine!” the singer wrote in a text image shared on Instagram.

“I can’t bare to see it! Innocent Israeli and Palestinian children are hiding in bomb shelters, over 40 lives lost in Gaza alone, at least 13 of whom were also innocent children! There needs to be some kind of resolve! We are sadly watching innocent people fall victim to notions perpetuated by government and extremists, and this cycle needs to be broken.” In the caption, she wrote, “I stand with humanity!”

This isn’t the first time Rihanna has taken to social media to discuss controversial political topics. She has actively posted messages about Black Lives Matter, she vocalized her distaste for former incompetent President Donald Trump, she addressed the farmer’s protest in India, she’s advocated for undocumented Mexican immigrants, she voiced support for Sudan, and she sent messages supporting Americans Indigenous peoples during Thanksgiving…and some have also noted that seven years ago, she tweeted “Free Palestine,” but the tweet has reportedly been deleted. Still, alleged screenshots have been shared.

Check out the singer’s post, and a few reactions, below. What do you think of this? I think in situations like this it’s important to educate people on things rather than immediately getting upset and looking to “cancel” them. I think Rih just saw war and wanted peace as the alternative.

Rihanna is giving such “all lives matter energy. “ I’m disappointed. It’s not a conflict!! It’s one sided pic.twitter.com/jTtcQbV5Bs

i changed my mind, rihanna can keep her damn album. #FreePalestine 🇵🇸 pic.twitter.com/qBaFgLeBvu

girlie what???? what happened to 2014 free palestine rihanna??? theres no middle stance in this situation pic.twitter.com/RXIL37WGBZ

Hey @rihanna Palestinians don’t have bomb shelters — we don’t have any protection. There is no shelter. Palestinians in Gaza have nowhere to hide and nowhere to go. Palestinians have no military, no nuclear weapons, we’re not bankrolled by billions of US dollars. Happy to discuss https://t.co/Iq3onP7wcc

Rihanna nor Gal have said anything wrong. They want peace between the nations, neither of which were siding with Israel. The whole country isn’t accountable for the actions of the israeli govt. They acknowledged the root of the problem and want justice for their actions.

she should be asking for Israel to put an end to their actions. this war was started by them, Palestine is simply on the defence so her wording makes it seem as if the 2 sides are in equal footing. Palestine would have ended this in a heartbeat if they could.. they have no power

This is an old deleted tweet from Rihanna standing for Palestine , and now she gave us this Israel victim energy
Girl, Were You Silent or Were You Silenced? https://t.co/ThWJ2Ahh4W pic.twitter.com/4rmYUWKQjd