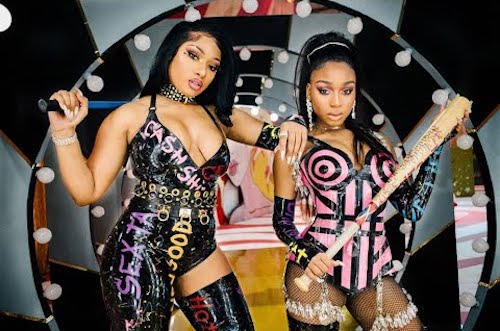 Well this was just a heavy dose of girl power.

When it was announced last month that Megan Thee Stallion and Normani’s would be collaborating on a song for the Birds of Prey soundtrack, plenty of fans were thrilled with excitement. The idea of these two Houston Hotties (Normani grew up in the southern city just like Meg) teaming up to deliver a girl power anthem, and the soundtrack for a film that celebrates badass women seemed like a perfect opportunity and it appears they may have delivered.

Taking on the popular “diamonds are a girl’s best friend” theme, these two queens give us a sultry yet tough-as-nails track to hype the girls up. Sounding reminiscent of much of what we’ve learned to be Megan’s style in the past but given a bit more of a mainstream twist with Normani’s smooth and sultry vocals.

In the video, Meg and Normani deliver Harley Quinn on a baseball-bat-assisted-rampage energy, alongside a homage to Marilyn Monroe’s iconic role in “Gentleman Prefer Blondes,” mirroring Margot Robbie in the first Birds of Prey trailer. The only men in the video are the villains, which our sheroes (Megan and Normani) take down effortlessly. “Diamonds” seems to be an anthem for self-assured women who are all about their money and don’t need a man to secure it.

Quotable lyrics:
I’m a super she-ro, bitch, don’t try me, ho
Bad like a villain, I pop it and then I reload
All the best things in life come for free
But don’t you think that applies to me
I do what I want ’cause I know that I’m hot
Ain’t in a band, but you know how I rock
Don’t need no clippers to give you a chop