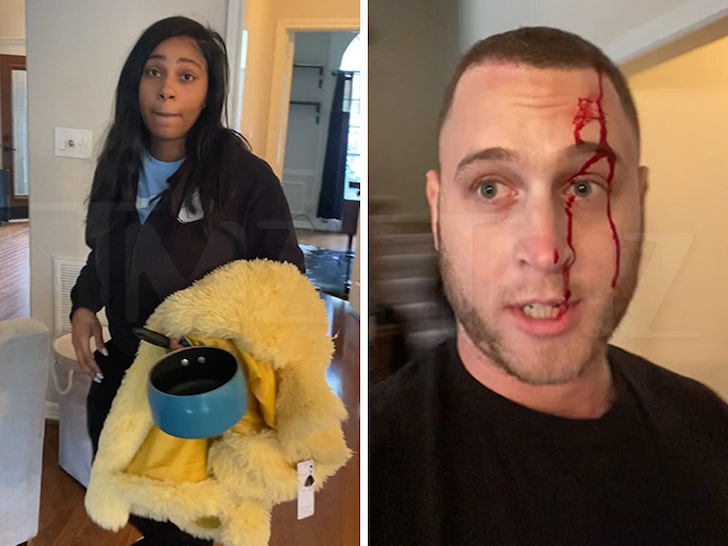 While Chet Hanks is out here calling on a “White Boy Summer” and pitching “Black Queen Summer” t-shirts is he out here harming those same black queens? Court documents and a video leaked video showing Chet after an alleged knife attack from his ex-girlfriend Kiana Parker suggests everything in the buttermilk ain’t clean.

Quavo and Saweetie weren’t the only couple out here having some tussles, it seems. A video was recently released showing the aftermath of an alleged assault on Chet Hanks by his ex-girlfriend Kiana Parker. As Chet attempts to popularize his “white boy summer” aspirations, the son of famed actor Tom Hanks is accusing his ex-girlfriend Kiana Parker of violently attacking him during their relationship. However, she is also According to the report by TMZ, an altercation took place on January 8 between Chet and Kiana at Hanks’ home in Texas. In the video, Chet accuses Kiana of attacking him with a knife. His face is dripping with blood as cuts appear on his forehead. Kiana denies cutting him.

Parker also claims that Hanks has a history of violence towards her, filing for a restraining order in January and alleging that the celebrity roughed her up on multiple occasions throughout their relationship. During one alleged incident, Kiana says that Chet became violent after she told him she was going to leave their hotel room to go get food. She says that the actor grabbed her by her wrists and started flinging her around to keep her in the room.

Parker says that Hanks threw a bottle at her and chased her down the hallway in his underwear. She also claims that he told her that nobody would believe her story because she’s “just a ghetto Black bitch”.

As for the knife-wielding incident, Parker says that she arrived at Hanks’ home to move her stuff out. She says Chet was antagonizing her and he was actually the one to grab a knife. She took a pot, she is seen in the video, and swung it to defend herself.

“The day after Chet Hanks confronted Kiana Parker about stealing money from his credit card, while Ms. Parker was accompanied by a huge male carrying a gun she viciously attacked Chet with a knife, which caused him to profusely bleed,” explained Hanks’ lawyer Marty Singer. “It is all on video and the undisputed video tells the whole story. Her claims are completely false, fabricated and fictional.”

Take a look at the video along with info on the court case below. Are you girls still in for that “White Boy Summer?”

The infuriating thing about #WhiteBoySummer is Chet Hanks subsequent PR-use of “Black Queen Summer” while claims of violence against his (now ex) “Black Queen” surfaced a mere 3 months ago. Source: Fort Bend County TX CAUSE NO. 21-DCV-279935 #StopViolenceAgainstWomen #Hypocrisy pic.twitter.com/hOleTW4g53

So yeah Chet has been deemed guilty of abuse by the courts pic.twitter.com/z8qpZMt9Ev

I looked into this because I saw @SheNancyGens tweeted the case information. I read the documents. Chet Hanks isn't somebody y'all ladies need to buy or support from. Chet is not only abusive but also racist. He degraded her for being a black woman. She goes into detail about him https://t.co/GBJxAhAxko pic.twitter.com/9Q8hR8khRv