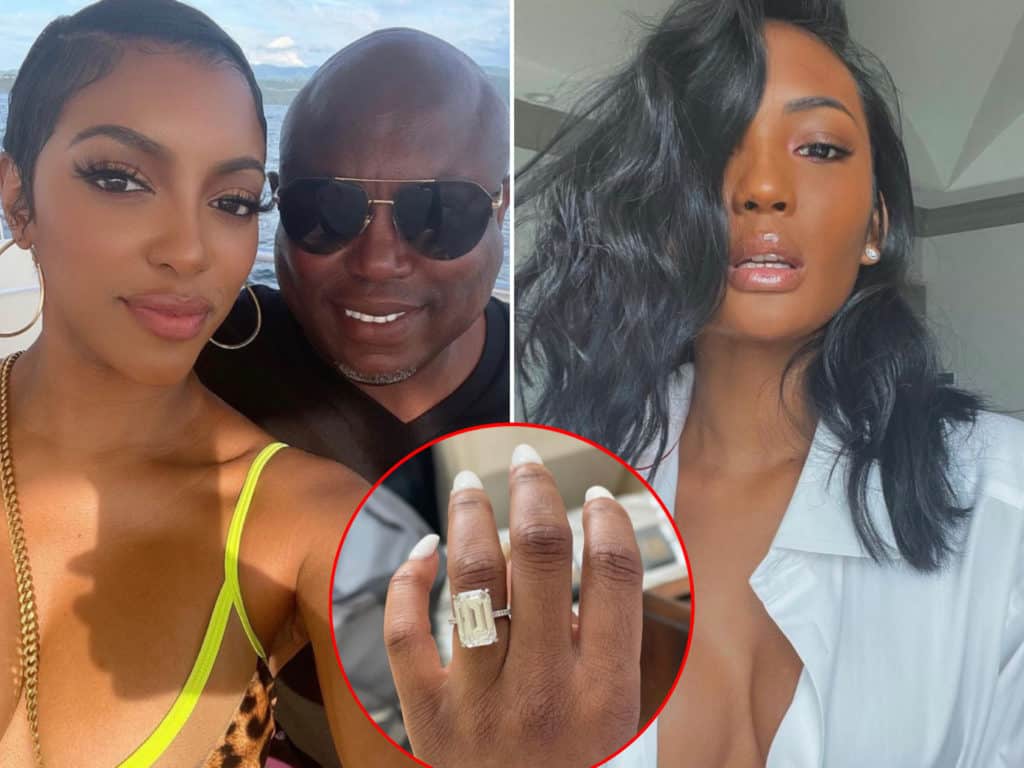 Porsha says that she’s “crazy in love” with her ex-friend’s ex-husband. Now, y’all know I love me some Porsha..however, had I been Fallon in this situation she’d definitely have to square up. And that’s on Bolo.

Even people who aren’t fans of reality television have kept this story as a trending topic. Real Housewives of Atlanta star Porsha Williams has lived her life out loud since joining the Bravo cast back in 2012, and since that time, she’s found her name engrossed in several controversies. Within the last two seasons of the show, viewers saw her developing a relationship with businessman Dennis McKinley, then the pair got engaged and revealed they were expecting a child together, but soon, their relationship ended after McKinley admitted to cheating.

Porsha has kept her love life on the low and instead has shone a light on her activism, however her Monday (May 10) revelation took social media by storm. There have been rumors about Real Housewives of Atlanta newcomer Falynn Guobadia’s marriage to Simon Guobadia, and some speculated that Porsha was dating her friend’s ex-husband. On Instagram, Porsha uploaded a photo of herself with Simon, and in the caption, she detailed their romance.

“Our relationship began a month ago—yes we are crazy in love,” wrote Porsha. “I know it’s fast but we are living life each day to its fullest. I choose happiness every morning and every night. Tuning out all negative energy and only focused on positive wishes. He makes me so happy and to me, that is what matters most.” She added that Simon filed for divorce from his “previous marriage” in January and it’s rumored that it was finalized in March.

Porsha was how Falynn was introduced to the show, as a friend. The two had scenes where Falynn welcomed Porsha into her home, met Simon, and the ladies even took a dip in the pool. However, in her post, Porsha denies that there was a friendship. “Falynn and I are not friends, and Simon’s divorce has been settled. Our relationship is a positive, loving step forward in everybody’s lives.”

Tamar Braxton, Teairra Marie, Nene Leakes, and thousands of others sent Porsha and Simon well wishes. The reality star added that her ex-fiancé and her new love Simon are committed to keeping the peace. Falynn has yet to publicly comment, but everyone from the Pop to Rap to the entertainment industry as a whole has kept this story at the top of trends since Porsha’s announcement was made.

Later, Simon revealed in a lengthy post that he has proposed to Porsha and they’re preparing for their happily ever after following a one-month courtship. He previously insinuated that his marriage to Falynn ended because she was unfaithful. The big debate is: What would you do if you were Falynn? And could you date your friend’s ex-husband? Check out posts and reactions below.

I don’t think any of us were expecting to get news of Porsha being with Falynn’s ex-husband on this lovely night like I’m truly shocked #RHOA pic.twitter.com/Z2QhYjgd2y

Porsha ain’t shit for that! pic.twitter.com/yUVuheddfv

Porsha when she got to Falyn crib and saw it was a rich chunky nigga that lived there pic.twitter.com/gcInY0IZ6n

Falynn had sis in her home, in her pool and gave her a gift basket filled with henny and jo malone candles and Porsha turned around and said we were never friends kgksfgsfsfjsfgsjfsf https://t.co/yUe56L5uOC

🎯 I’m not buying this whole “ we’ve only been dating one month and we already in love” story . And Simon made it a point to tell everybody : falynn cheated, the separated back in January and that hadn’t been happy for years. It’s like he was laying the framework to spill this ☕️