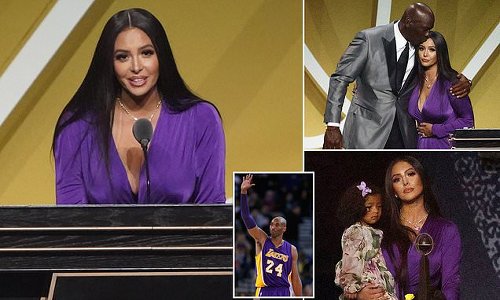 The late Laker legend, Kobe Bryant, was honored at the Naismith Memorial Basketball Hall of Fame, Saturday, having been inducted as a member of the Class of 2020. In his place, his wife, Vanessa Bryant spoke during the ceremony.

Michael Jordan stood by her side as she continued to congratulate her late husband.

“Congratulations, baby,” Vanessa continued. “All of your hard work and sacrifice has paid off. You once told me, ‘If you’re going to bet on someone, bet on yourself.’ I’m glad you bet on yourself, you overachiever. You did it, you’re in the Hall of Fame now. You’re a true champ. You’re not just an MVP, you’re an all-time great. I’m so proud of you. I love you forever and always, Kobe Bean Bryant.”

Bryant, an 18-time All-Star and five-time champion, is universally considered to be one of the greatest basketball players of all time.