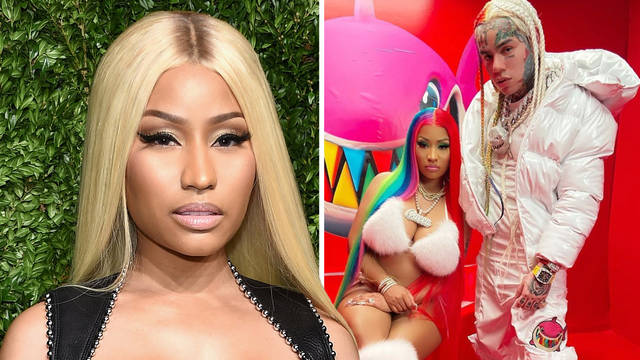 How did she manage to even turn this into being about “writing raps”?

Nicki Minaj attempted to criticize rappers targeting 6ix9ine for snitching by saying all rappers have mingled with people who have sketchy pasts. As promised, Nicki Minaj and 6ix9ine joined one another on Instagram Live as both fans and critics tuned in for the show. Over the last few days, Nicki has been the target of naysayers after it was revealed that she decided to collaborate on “Trollz” with the federal informant rapper, but although there has been a call for no one to work with 6ix9ine, his numbers are steadily increasing, apparently everyone can’t stop watching the train wreck. During their chat, Nicki spoke about 6ix9ine’s snitching controversy and why she feels rappers don’t have the right to call out 6ix9ine.

A portion of the proceeds from #Trollz including merch items, will be going directly to The Bail Project Inc. [@bailproject]. The fund provides free bail assistance to low-income individuals who can’t afford to pay bail while awaiting their trial. We want to protect and support the thousands of brave people working on the front lines of social justice, using their voices to demand AN END to the targeting and killing of Black Americans by the police. #BlackLivesMatter link in bio to Pre-save #TrollzVIDEO tmrw @ midnight 🎀🦄🌈🌈🌈🌈🦄🎀 NickiMinajQueen.com

“Street n*ggas have every right to feel how they wanna feel about snitchin’ because they live that life,” Nicki Minaj said. “I feel rappers need to play it easy because everybody mingles and integrates with everybody and if a top executive rat called one of you unsigned rappers right now to sign y’all, y’all signing.” Tekashi 6ix9ine chimed in for her to say it louder for people who may have missed her point.

“We not gon’—if a rat executive call y’all to sign, y’all signing. So, let’s be clear when we talk about rappers versus street n*ggas. It’s rappers that put guns they ain’t never bust a day in they life in the music all the motherf*cking time so we’re not talking about rappers. I feel street n*ggas have a right to feel how they wanna motherf*ckin’ feel because they in the field and you know, I’m not on the block with 6ix9ine.”

Nicki also said that artists occupy “rooms all the time with people with sketchy pasts and I’m not judging anybody ’cause that’s just, I’m not doing that.” She said that she has respect for so many “of these people” and she “would never fix my face to talk crazy about them.” Then, she mentioned Kenneth Petty. “My husband doesn’t f*ck with the snitch culture. My husband is just like, ‘You know, I can’t f*ck with that.’ And I respect him because he’s lived a different life. Y’all wanna make it rap one minute and streets the next minute. Y’all wanna talk about people not writing they raps one minute, and then do songs with people that don’t write raps the next minute. But if somebody talk about the integrity of hip hop it’s a problem, but y’all can talk about the integrity of these streets and not snitching. We not on the block. None of you n*ggas is on the block!”

6ix9ine commented on the video saying, “People who don’t like Nicki are miserable in their own skin.” Swipe through to listen to the clip of Nicki Minaj and 6ix9ine on Instagram Live discussing snitching below and let us know if you agree with her. Chile, just as I thought…TR- I’ll let y’all finish it. Thoughts?

#PressPlay: #NickMinaj shares her thoughts about rappers referring to #Tekashi69 as a rat, and makes the differentiation between business & the street! (SWIPE)