B. Simone is coming under fire for comments she made during a new interview with Nick Cannon.

While most of us already know that B. Simone’s ideal man = DaBaby, Nick Cannon still decided to grill the TV personality on the traits she looks for in a would-be partner during an interview. Her answers have resulted in some strong twitter reactions, making her trend this morning across the platform.

In the interview, which was actually conducted two weeks ago but is receiving renewed life thanks to a clip that The Shade Room shared (below), finds B. Simone talking about her love life and the possibility of going on a blind date (set up by Cannon). When Cannon presses B. Simone about what she wants in her man, Simone states, “He can’t have a 9-5,” she continues, “he can be a hustling entrepreneur,” before confirming with Cannon that she wants someone who is “CEO status.”

#PressPlay: #BSimone gave #NickCannon an idea of the type of man she’s looking for, #Roomies! She says she wants an entrepreneur, who will understand her lifestyle rather than a man who works a 9-5. What are your thoughts? (🎥: @nickcannonmornings)

She continued, “I think entrepreneurs should date entrepreneurs,” before claiming that anyone else would not understand her lifestyle. Now that the public has zeroed in on these remarks, they have things to say. Check out some of the reactions across twitter this morning in response to B. Simone’s ideal man wishlist.

B.Simone once stated that she only had $42 in her bank account, but now wants to shame 9-5 workers?

Even some of the most successful entrepreneurs that i know aren’t up working 3 am pic.twitter.com/8AhaGd4vle

Bitches like B. Simone be wanting CEO’s but still haven’t worked their way up from head receptionist 🤦🏿‍♀️

B.Simone steady throwing salt on the wound huh smh “I can’t fw a nigga who working a 9-5” sis, you was homeless before & doing the same shit.. humble yourself.. please!

B. Simone is the perfect example of a mf who forgot where they came from

B Simone is the perfect example of “i got some money now i toot my nose up” but remember. Those same people, those 9-5 ers are the reason YOU hit your mark. https://t.co/U7tC4F19Fp

Yet, B Simone still does not have a man. pic.twitter.com/YdahLc4sF9

She saying all this as she is live from her APARTMENT. Girl stop acting like you THAT girl. I know niggas working 9 to 5s that live in and own their own homes, and you talking cash shit from above the leasing office. https://t.co/D0v7O7fMy8 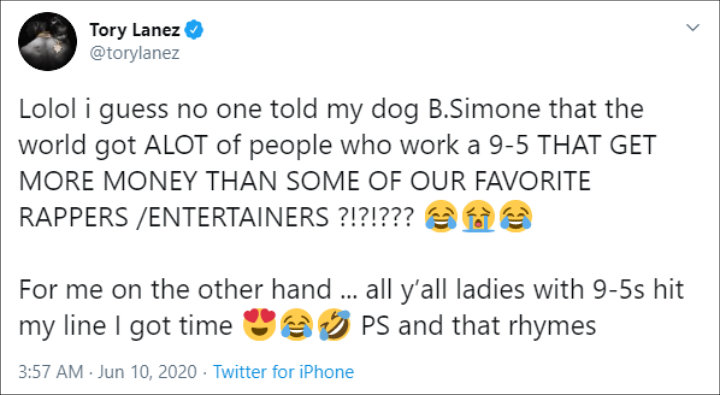