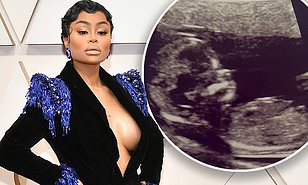 Blac Chyna shared a photo of an ultrasound on Instagram and the people have questions.

Blac Chyna just loves to keep the people guessing, doesn’t she? After being criticized for attending the Academy Awards this weekend, specifying that she was her recording engineer’s plus one guest, the reality star is making new headlines for a recent social upload, which seems show the “Real Blac Chyna” making a very exciting announcement.

Already a mother of two, Blac Chyna seemingly just announced to the world that she’s expecting another bundle of joy, posting a photo of an ultrasound on Instagram. Her caption makes no mention of the baby being hers but, considering the photo appeared on her personal page, fans are reasonable in interpreting this as her proper announcement. “Blessed 2020,” wrote the former dancer as her caption, staying true to the cryptic nature of the post. To muddy things up even further, Chyna deleted the post mere moments after posting it.

The comments show just as much confusion as you would expect, with fans asking who the baby’s father is, if the kid is hers, and more questions that are totally explainable. Hopefully, Blac Chyna comes through with an official statement, clearing up the post and confirming whether or not she’s actually pregnant. If this is an announcement on her part, we would like to congratulate the star on another addition to her family, which already includes King Cairo Stevenson and Dream Kardashian, however, would anyone even be shocked if Chyna was doing this for specifically the purpose of getting up talking? Putting a cease to the Oscar’s criticism, we see what you did there. Thoughts?