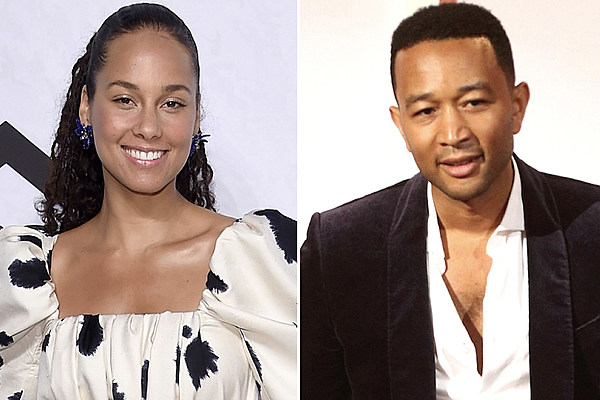 It’s seems like everyone’s names are being thrown around for battles these days. John Legend hints that he and Alicia Keys may engage in a “Verzuz” Instagram Battle that may include “dueling pianos.”

The Verzuz battles are the new wave, and artists are wanting their pie of the pie. From writers to producers to artists, millions of people have tuned into Instagram Live to watch Swizz Beatz & Timbaland’s Verzuz series. This weekend (May 9) we’re all set to watch Erykah Badu and Jill Scott celebrate their hits with R&B-soul fans, and in a recent interview with Nick Cannon, John Legend hinted that he and Alicia Keys may have something cooking up, as well.

“I think that would be the best thing,” he told Cannon. “Honestly, if we do it, like a dueling pianos—” Nick Cannon jumped in excitedly co-signing the idea. “That would be crazy! I would love to see that. I mean, obviously I’m a huge fan of both of you. Not just your songs and your artistry, but really, your musicianship,” Cannon said. “I feel like you guys don’t get the opportunity to show that off. Especially for this generation who needsd to understand musicality and the importance of theory and putting all of that together for people to be as successful as you and Alicia. We gotta see that.”

John Legend hinted that it actually may be in the works. “I think we will,” he replied. “What I do like with the way it’s been going so far is we’re seeing producers and writers, more than just artists. The producers and writers, what’s so cool about it is, maybe you didn’t know that they produced this song. For me and Alicia, you know it’s our songs ’cause we are the front person for them. We were on the radio singing them, but for all of these producers like Teddy [Riley], Babyface, and all these other producers, ‘Oh, I didn’t know they were behind that song.”‘

He added that the best part of the Verzuz series is the ability for audiences to learn about the music history behind the jams that we hold near and dear to our hearts. Watch John Legend chat with Nick Cannon below about his home life, quarantining, his forthcoming album, and new music.