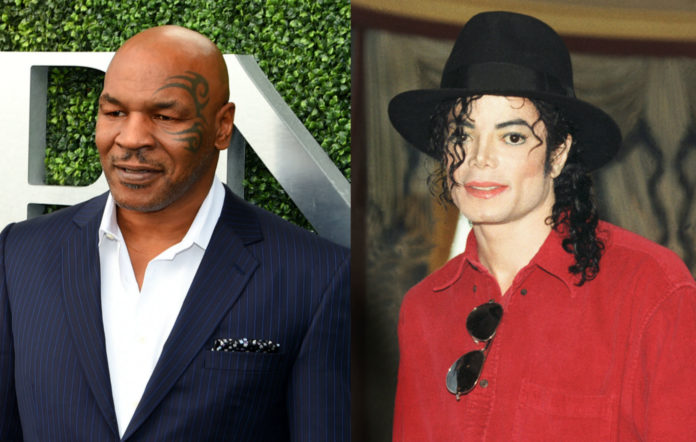 In case you missed it, Mike Tyson was the latest guest to sit down on T.I.’s ExpediTIously podcast. Over the course of an hour-plus, the pair discussed a variety of topics, including several interesting tidbits on both 2Pac (check that out here) and Michael Jackson, who initially found himself on Iron Mike’s bad side. “I’ma tell you something funny about him,” says Tyson, after Tip asks about the late pop icon. “Mike is interesting. I met Mike one day, he had a concert in Cleveland. I’m with Don King. Me and Don come in, I’m champ and everything, Don gives Michael Jackson the peace sign. Michael gives Don the peace sign. I give Michael the peace sign, and he put his hand down.”

In a way, I said ‘did he play me?'” reveals Tyson, before rationalizing it must have been a misunderstanding. “I knew he didn’t play me. We went backstage…I’m signing autographs, and Michael comes over. He talks to Don, he doesn’t talk to me…I said ‘lemme go and meet Mike, cause that’s what I’m here for.'” As he went and approached the King of Pop, Mike responded by pulling the snub. “He said ‘do I know you from somewhere? Where I know you from?'”

“I just shattered the record a month ago,” continues Tyson. “He’s waiting by the door and says ‘where I know you from.’ He crushed me. I said I was just a fan. When he got in the car, I said ‘that cold motherfucker.’ I hated his guts forever, everytime I heard Michael Jackson’s name, I said ‘fuck that motherfucker!’ So one day, Rodney Jerkins was working with him and said ‘come see Mike.’ I said ‘no way, I don’t wanna see that motherfucker, he dissed me! He played me, made me look like a bitch in front of all these people.”

Thanks to Jenkins’ persistence, Mike decided to give MJ a second chance. “He said ‘Mike, he asked for you man’,” says Tyson. “We started hanging out together. I said ‘fuck man, he’s a good guy!’ In my mind I was like, you knew who I was, why you playing me? That’s the thing, he’s a n***a. That’s what surprised me.” He says that Jenkins was showing them a video with a particularly attractive woman, and Mike joked that a Rolls Royce would help seal the deal. “I was like damn, Mike said that!?” laughs Tyson. “Fuck! Mike know what time it is. That’s what I really wanted to tell you. He wasn’t no stupid little feeble looking little boy like Peter Pan. He’s fucking sharp. He knew what time it was. It blew my mind. I thought he was a fucking idiot till I met him that day. Then I knew he was a player. I thought he was a retarded little boy, but he was a player.”

Check out the full episode of T.I.’s ExpediTIously right here. What do you guys think of what Tyson had to say?