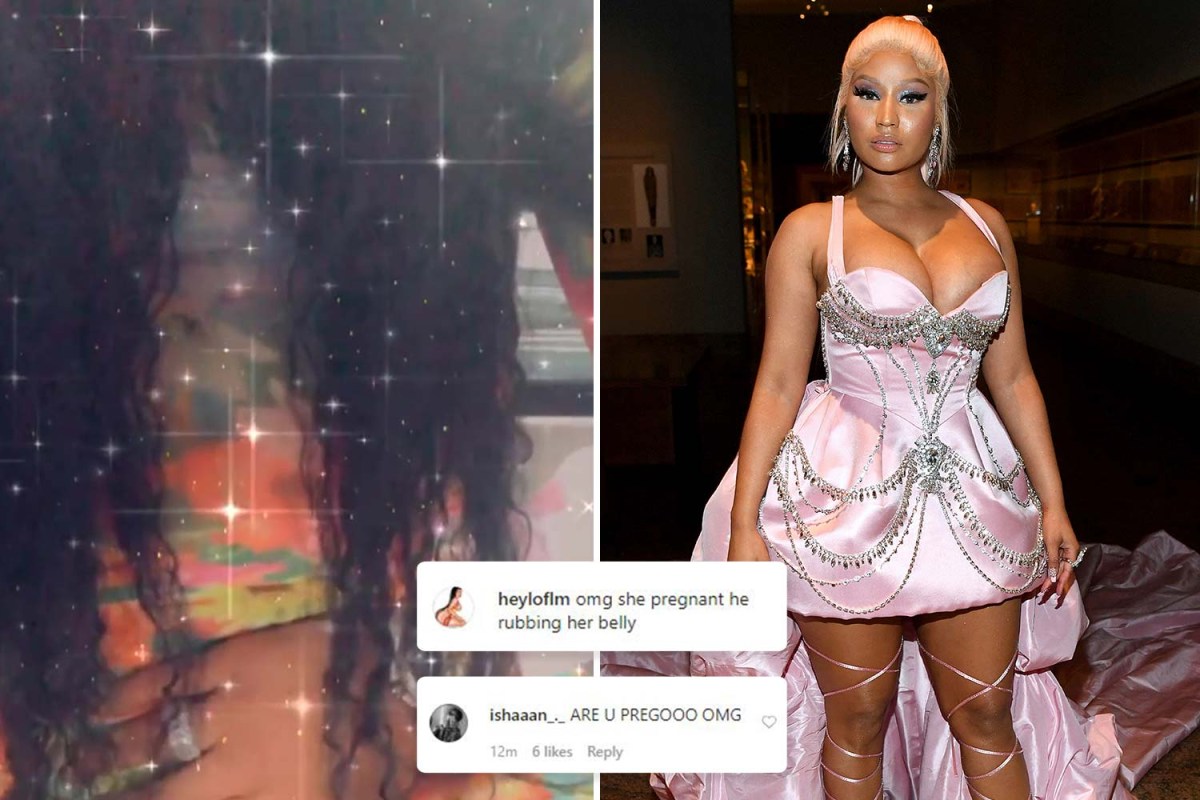 Nicki Minaj has fired back at pregnancy rumours that started clearly saw coming when she posted a video of her husband Kenneth Petty rubbing her stomach.

Nicki Minaj insists that she’s only “pregnant with so many ideas for this album” after fans went crazy on an Instagram video showing her husband Kenneth Petty rubbing her stomach. Pregnancy rumors have been circulating about Nicki ever since she and Kenneth went public, and after they tied the knot last October, they’ve only increased. Last week, when Nicki indicated that she and Kenneth have “a lot to celebrate,” some thought she might be referring to having a baby on the way. This assumption was only reinforced when Nicki posted a video of her and Kenneth on a plane to her home country of Trinidad, in which she makes sure to get a shot of Kenneth rubbing her stomach in the frame.

The comment section of the post was flooded with fans asking once and for all if she was pregnant. It seemed inevitable, but Nicki has responded to various inquiring people that she is not, in fact, with child.

#PressPlay: We’re just trying to figure out what Mr. Petty said 😩 Meanwhile, #NickiMinaj responds to a few fans in her comments 👀

One user asked her straight up if she was pregnant or not, to which Nicki responded, “Why I feel like I’m about to get a beating? Y’all swear y’all my mother chile. I’m pregnant with so many ideas for this album. It’ll be my best.” When another fan asked why Kenneth keeps rubbing her stomach, she explained, “Babe u gotta ask him. He rubs my feet & my stomach. Ima tell him stop rubbing my stomach tho. Cuz chile…” Though these and other responses are likely Nicki’s way of shutting down the pregnancy claims, it’s worth noting that she did not, technically, deny being pregnant. Still, if the self-proclaimed queen does not wish to disclose her pregnancy status just yet, that is actually totally up to her.

After battling those comments, the ‘Chun-Li’ rapper then decided to take to Twitter to seemingly respond to those who accused her of posting the belly-rubbing video for attention, tweeting: “I use MY social media to share my life & music with MY fans. You use yours to hate on my life, music and MY fans. One of us needs love & attention & I don’t think it’s me. I get more than enough.”

I use MY social media to share my life & music with MY fans. You use yours to hate on my life, music and MY fans. One of us needs love & attention & I don’t think it’s me. I get more than enough. ♥️

What do you guys think? Was Minaj simply sharing her life as anyone else would or was she seeking a little extra promo from the blogs?

Is nicki Minaj tryna say she pregnant with that little video . Lawd idk if she’s always been this lame or it’s this nigga but Chile I’m over her