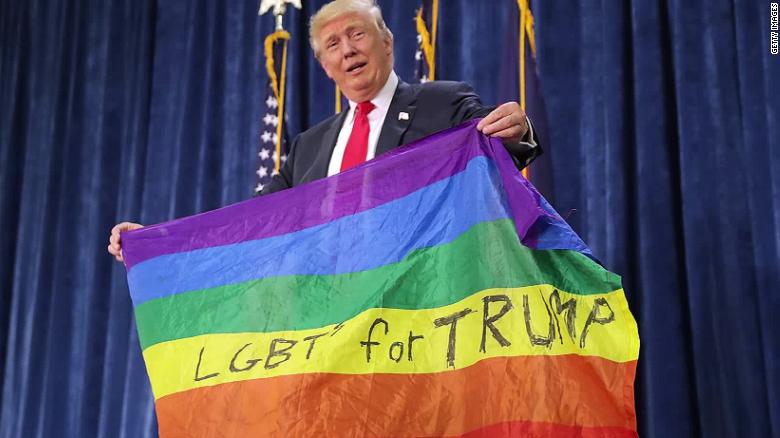 Trump has found himself in hot water with the LGBTQIA+ community after it was announced that he rolled back policy enacted under the Obama administration.

Y’all president has executed quite an order this week that has angered many American citizens. The month of June is Pride Month and many in the LGBTQIA+ community are not only protesting alongside Black Lives Matter advocates, but they’re celebrating Pride, as well. Today (June 12) is especially sensitive to the LGBTQIA+ community as it marks the fourth anniversary since Pulse, a gay nightclub in Orlando, Florida, was terrorized by Omar Mateen. The 29-year-old stormed the nightclub and killed 49 people while injuring 53 others. As the LGBTQIA+ advocates remembers those who lost their lives, President Trump revealed that he’s “rolled back an Obama-era policy that protected LGBTQ patients from discrimination,” according to Politico.

During his administration, Obama unveiled a policy that stated health care providers couldn’t discriminate against women who inquired about abortions, transgender patients, or any patient that the medical professional doesn’t want to treat because they don’t align against the provider’s personal or religious beliefs. It was reportedly a way of protecting people in an anti-discrimination clause, but Trump has nixed it. There has been public outrage at the timing of this announcement, while some have stated it’s purely coincidental.

“These actions demonstrate how little this Administration values the life, health and safety of LGBTQ people,” said Sharita Gruberg of the Center for American Progress. “It’s even more of a disgrace to do so on the anniversary of the deadliest attack on the LGBTQ community in US history.” Check out a few responses about the political move below.

The Trump administration just finalized a rule that would remove nondiscrimination protections for LGBTQ people in health care & health insurance on the 4 year anniversary of #PulseNightclub 💔49 human beings lost their lives…we will keep fighting for equality & gun control pic.twitter.com/qGRdqvv0Br

And not just trans people. All LGBTQ people, folks who are pregnant, and other marginalized communities can be denied ALL forms of medical care by providers if the provider feels treating that patient would go against their personal or religious beliefs. This is all real.

My report on the Trump administration’s repeal of transgender health care protections at @them.

“This is beyond heartless.” – @ACLU

It is outrageous that Trump, in the middle of a pandemic, is working to prevent LGBTQ+ Americans from getting health care they need. Discrimination of any kind has no place in our society. We must defeat Trump, guarantee health care as a right and protect all LGBTQ+ Americans. https://t.co/aNhYc2R4M5

In the middle of a pandemic, the President wants to strip away health care & risk LGBTQ+ Americans' lives to pander to right-wing ideologues. This is hateful & wrong. Trump must protect LGBTQ+ rights, and if he won't, the Senate must act. https://t.co/hHIA53PZc8