Rumors have been swirling that French has been smashing Kash’s cakes and surely this will only fuel that.

As an artist…or well, anyone with a passion, one of the most devastating things to hear is that you should quit. It’s one thing to have people not like your work, of course, that always happens. But for people to suggest you quit altogether is downright savage. That’s why Kash Doll stepped in to defend her “man” French Montana after a meme suggested he should be left in 2020.

The meme listed four rappers as artists that needed to be left in 2020. French Montana was listed along with Trippie Redd, Tekashi 6ix9ine, and Lil Xan. The fact French, who is a veteran compared to those guys, was even mentioned along with such young rappers was odd to begin with. Kash Doll retweeted the image with a message of her own. “Nah French gave us too many classics to b on this list!,” she proclaimed. That, seemingly referencing French’s longevity, she wrote, “It’s the audacity for me. 20years dnt forget.”

French Montana and Kash Doll were rumored to be dating, and their exchange on social media recently has only added fuel to that fire. French as been erroneously linked to Doja Cat and NeNe Leakes in the past few months, so let’s see how this one pans out. Are you feeling these two together? More importantly, do you agree with Kash that French has brought us classics? 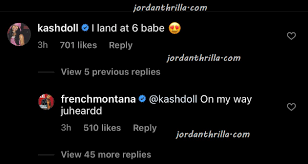