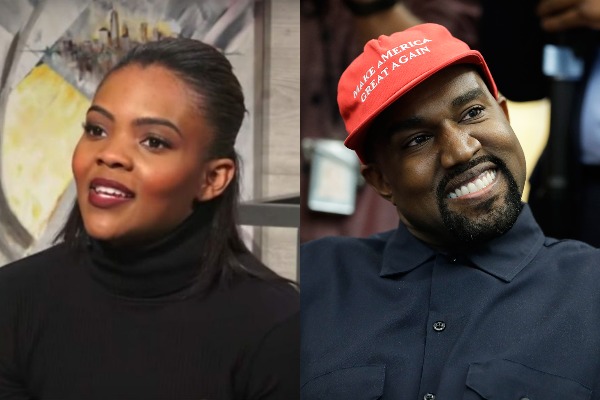 Just when you think their may be hope for Kanye West, he puts on his tap dancing shoes again. It looks like West and Owens are once again displaying their friendship, and people had a lot to say about it.

His controversial remarks have captured the attention of the world, so it comes to no surprise that Kanye West’s support of Candace Owens has caused quite a stir. The Birthday Party presidential candidate has often said or done things that have given people pause, but on Thursday (September 10), Ye tweeted a brief message to the controversial far-right commentator that elicited a hailstorm of responses.

The rapper posted a photo of Candace Owen’s book on Twitter with the caption, “THANK YOU CANDACE OWENS.” Like many of his social media messages, Kanye didn’t offer up any other information or explanation, but that doesn’t mean people didn’t take it upon themselves to interpret his intentions.

West’s undying support of President Donald Trump as well as his comments about slavery and Harriet Tubman came up in discussion among social media users, as well as the previous rift Ye and Owens had about her “Blexit” shirts. After it was being promoted that Kanye designed her logo in 2018, he came forward to deny the claims and announced he would be distancing himself from Owens—and politics altogether. Some have suspected that this tweet is a hint that the two have made amends. Read through a few responses below.

I thought Kanye distanced himself from Candace? pic.twitter.com/uKITf3xLvx

He lost all my support. I'm not a democrat nor a republican
Especially not during this race, but backing up a coon ass person like Candace is distasteful and once again a slap in the face. He can let kim k drown him for all I care. We lost the real Kanye yrs ago. https://t.co/YnbgTnxGJ8

Kanye West is the greatest artist of all time. He is (or at least was) a creative genius the likes of which I may never see again in my lifetime. He was my hero. But when its promoting that airheaded hatemongering lunatic Candace Owens, I fully pump my breaks. Fuck that shit.

Candace Owens 🤢🤢 so badly wants go be white just like Kanye. Yet Kanye is involved with a family that so badly wants to be Black. https://t.co/Wv0h0lJLZN

Kanye West out here shouting out Candace Owens and I been told y'all I should punch him dead in the face pic.twitter.com/4QdIeqC7OA

I’m so disappointed, I’ve been a Kanye fan since the beginning. We’re from the chi, I was rocking with him through all the BS. But he pulled that Candace Owens BS and I had to take a stand. Unfollowed and won’t stream his music anymore 💔

I officially no longer like Kanye as a person. Candace Owens is the absolute worst. I can’t condone her or agree with anyone who does. https://t.co/86BmnU8AiQ

How will Kanye stans rationalize this with their hatred of Candace Owens? https://t.co/1ud0sxJH0K