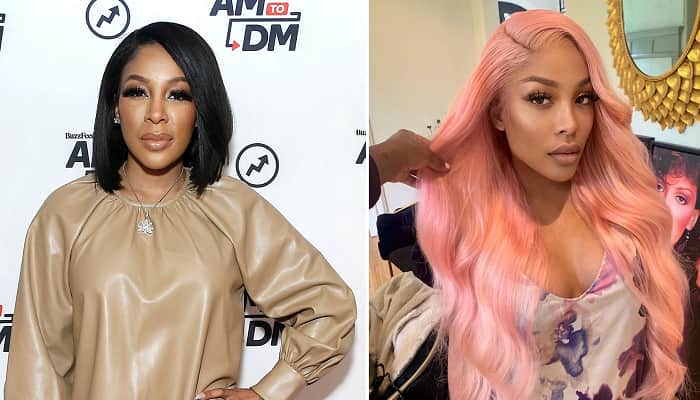 After displaying her gorgeous look, fans couldn’t stop talking about K Michelle’s glow-up and comparing it to old photos. But how can you really hate on a level up?

Another day, another set of folks acting like they wouldn’t make some adjustments here and there if they had the coin. A set of selfies kicked up a social media firestorm for K. Michelle. The singer has often shared photos to her social media pages, much like millions of others, but her latest pictures gave quite a few of her fans pause. While her gorgeous look was praised by many, some people pointed out that K. Michelle looks a tad different than she did years ago. (Which… is that really that uncommon?)

In one picture, the singer shows off her baby pink hair and in another, she gives viewers a closer look. In a caption, she addressed her absence from social media.

“I took some time off to live with myself,” wrote K. Michelle. “Excited to be back and on track. First show back July 2 Little Rock Arkansas. What songs y’all want on the set list this year?????” Her comments were flooded with heart emojis and compliments, but after the excitement settled, users were quick to point out differences.

K. Michelle has never been shy about speaking on her cosmetic surgery journeys with fans, especially her years-long reconstruction of her body due to unsafe butt procedures that nearly cost her her life. She’s even joked about surgery in the past when in a fight with a ‘Love & Hip Hop’ cast mate she mentioned that the castmate throwing a drink on her while in the midst of an argument almost “f*cked up her new nose.” Take a look at her new photos, as well as a few reactions, below and let us know what you think. At what point will social media realize this isn’t 1995 and plastic surgery simply isn’t taboo anymore? Besides, K really doesn’t even look that different. It’s called good make up and good work.

I’ve been staring at that K Michelle photo for the past 5 mins and I still can’t find K Michelle in that photo pic.twitter.com/35e2VgCvkb