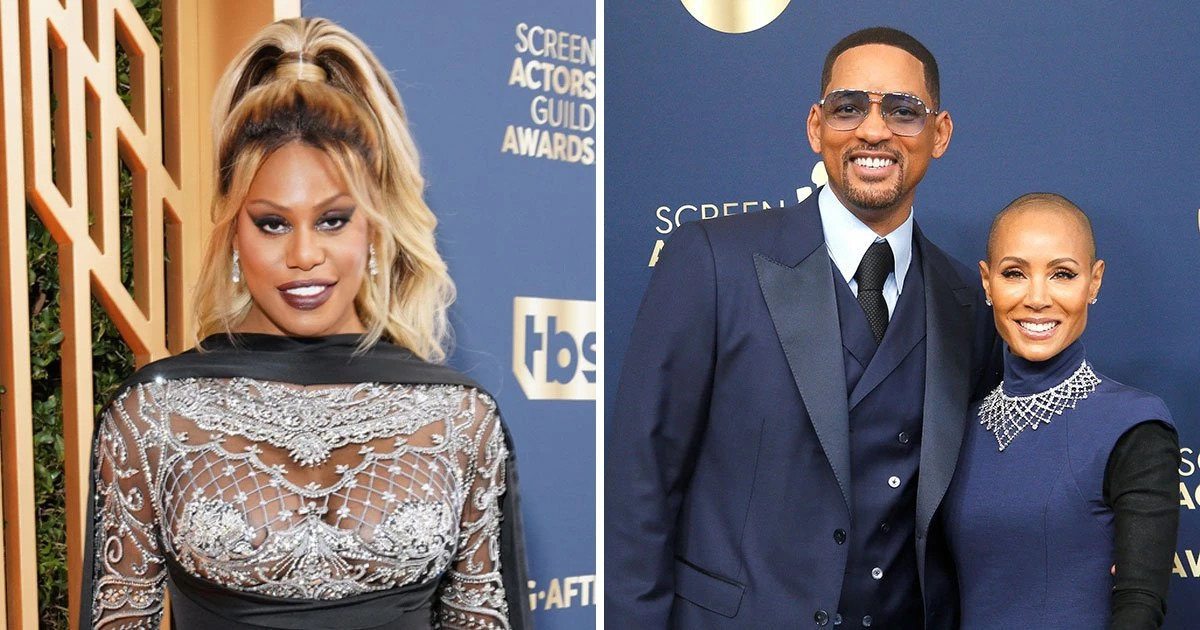 What I will say is there’s a time and place for everything. The same playful and funny “shade” that I bring on my platform may not always be the best route to take if I’m interviewing the same person on a red carpet. Make sense?

Will and Jada Pinkett Smith’s relationship has been the source of some highly publicized drama over the years, to the point where people created a change.org petition with the goal of minimizing their exposure to the couple’s frequent “tea.” That didn’t stop Laverne Cox from bringing up their “entanglement” drama at the SAG Awards this past weekend, though, and fans of the petition may find relief in the couple’s response.

The SAG Awards was full of invasive media moments, including a question thrown at Andrew Garfield about that rumor of fake butt on Spider-Man: No Way Home. As for Jada Pinkett Smith and Will Smith, though, it was less of a question and more of a mention after the fact.

As Laverne Cox ended her interview with the couple at the SAG Awards, she gave her goodbyes and said she was looking forward to more Red Table Talks and “entanglements.” The couple laughed off the potentially awkward comment and gave a surprisingly drama-free response.

However, not everyone seems to be laughing over Laverne’s comment. Social media users have been sharing the clip as it’s gone viral calling Laverne out for making the comment. While some have defended her stating it was all in good fun, others have called the moment tacky, including Vivica A Fox who shamed Laverne for trying to get a “viral” moment while discussing the topic during Cocktails with Queens which she co-hosts on Fox Soul.

Take a look at the moment for yourself below followed by some of the reactions and let us know what you think? Was Laverne doing too much or was it all in good fun?

Jada pinkett Smith says she’s DONE with entanglements during her interview at the #SagAwards w/ Will Smith pic.twitter.com/kfiAnzCbWl

Vivica A. Fox Says Laverne Cox's Mention Of "Entanglement" During Will & Jada Interview Was "Tacky" pic.twitter.com/eiR2oyrx9O

Not a tasteful comment from Laverne, who made Will and Jada visibly uncomfortable. In a field where it’s already hard to get celebrities to stop by Black journalists and interviewers, this does not make it any easier @Lavernecox https://t.co/6HhbqM1WJd

I like Lavern, met her when she wanted to “Work for Diddy” but there is a decorum to hosting and doing network correspondent work, especially with the caliber of people she was interviewing. Playful shade ain’t playful to everyone.

Laverne Cox is “tacky” for bringing up a topic that not only would not be known at all had both Will and Jada not revealed it to the public themselves but FORCE FED IT TO US FOR MONTHS ON END, including in a memoir Will is promoting NOW https://t.co/650iruO3Sp

Gosh, I can't believe that Laverne Cox was so disrespectful to Will and Jada on the #SAGawards2022 red carpet. Will is a frontrunner to get an Oscar for King Richard. Why are entanglements mentioned in this conversation to embarrass this power couple on their big night. pic.twitter.com/znLVDvZIgs

Im convinced that y’all were just waiting for a moment of Laverne Cox messing up so y’all could bully her. Will laughed his usual laugh and she said no more because Jada said no more. Y’all are more mad than the people in happened to