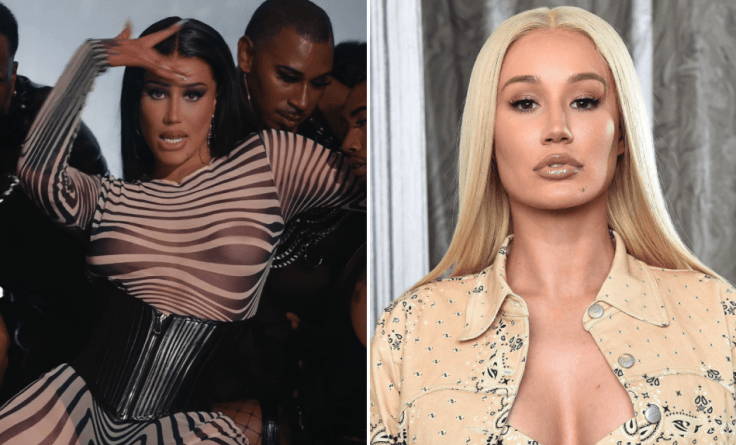 Let’s be honest, much of our community has never seen it for Iggy Azalea for one reason or another so it’s really so surprise or nothing new that she’s seeing with her latest release.

Iggy Azalea herself can’t possibly be surprised by these types of accusations at this point. Ever since the white Australian-born rapper sauntered into the world of hip-hop on Louboutin heels with her breakout single “Work” in 2013, she has continually faced heat for appropriating Black culture. Iggy has been accused of putting on a “blaccent,” exploiting Black culture, and even “blackfishing” by tanning her skin to look darker or more than one occasion. The “Fancy” rapper faced judgment once again following the release of her latest single “I Am the Strip Club,” a song that arrived with a music video that featured the House of Balmain.

The music video was initially praised by her devoted fans, but when clothing company Boohoo posted stills from the video, the replies quickly turned a mess, with users calling out Azalea for “blackfishing”—a term used to describe a non-POC attempting to appear of Black or Arab ancestry.

Many Twitter users replied to the video pointing out Iggy with jet-black straight hair and her claiming her skin noticeably several shades darker than her normally fair complexion. They then pointed out that she’s surrounded by Black queer men dressed in leather as she raps about getting ratchet and twerking, which… I see where we’re going with this.

Things got worse when not too long afterIggy was hit with “blackfishing” claims, and one of her fans sent her a message asking for the rapper to clear up the “fake narratives.” Iggy responded that she didn’t care about the comments, tweeting “f*ck those ppl babe lol.”

Iggy’s use of the words “those people” caused controversy and people began firing off tweets, demanding that she explain what she meant as they insinuated she was being racially insensitive. Her fans were quick to stand in the gap and defended Iggy against naysayers and Azalea jumped into the conversation to lay the controversy to rest.

“Exactly, the internet stay trying to read into sh*t that’s really not that deep,” Iggy responded. “Those people is anyone that has a problem with the fact that I wore a black wig and performed in a dimly lit room but have nothing to say about the same makeup in other scenes… not hard to understand [shrug emoji].”

Another Twitter user send Iggy encouraging words, telling her to “stay strong” through the backlash. “I know by now if I drop a video or song someone online will try and make it have a hidden meaning or find a way to make there be an issue,” Azalea replied. “That’s just how the internet is! I’m 10 years deep in it, you cannot shake me.”

Check out the tweets and some of the reactions below and let us know what you think. Are people reaching out of dislike for Iggy or is there some validity to the claims?

I know by now if I drop a video or song someone online will try and make it have a hidden meaning or find a way to make there be an issue. That’s just how the internet is! I’m 10 years deep in it, you cannot shake me. https://t.co/xXDaKphslW

I’m the same color as I always am, just in a dimly lit room with red lights.
It’s the same makeup from every other part of the video just with a Smokey eye and different wig.
Just ignore them, who cares?
Let em talk.

You are telling me that THIS is Iggy Azalea? When will the blackfishing cease? When. https://t.co/kt2eXtPJSB

who’s this? i thought iggy azalea was white https://t.co/QlwfFtAf7n

I give it 1-2 business days before @IGGYAZALEA tries to guilt trip people with her white feminism BS. As usual, she’ll blame everyone else for her not liking herself and Blackfishing https://t.co/E3qhaK5Fax