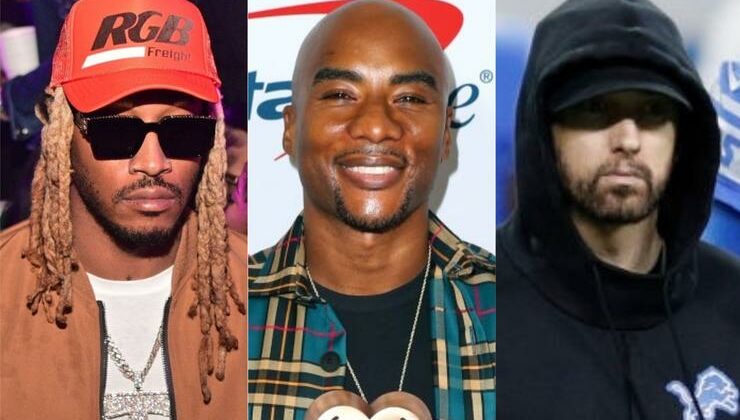 Now, I’m not the biggest Eminem man myself, but I’m not about to deny the man has a catalogue. Charlemagne Tha God doesn’t think Em would win in a Verzuz battle against Future. He also suggested that Em might not even beat 6ix9ine.

Charlamagne Tha God doesn’t believe that Eminem, one of the most successful rappers of our time, would fare well in a Verzuz battle. He said during the latest episode of The Brilliant Idiots that he thinks Future (and maybe even 6ix9ine, depending on who’s voting) would “wash” the Detroit rapper in a battle.

Despite being known as a dominant battle rapper, as well as one of the most decorated rappers ever, Charlamagne Tha God thinks that Eminem would make a mockery of himself on the popular Verzuz platform. When he and his co-hosts were discussing the possibility of Eminem ever doing Verzuz, Charlamagne said that he doesn’t think Shady would win against anybody.

“Em gets washed in any Verzuz,” said the podcaster. “Y’all gon’ stop this. Any. Any! Em don’t have the songs like that. Em can rap and we like Em as a rapper.”

When Andrew Schulz argued and asked if somebody like 6ix9ine could beat Eminem, Charlamagne surprisingly didn’t disagree.

“But [other rappers] got better songs,” clarified Charla. “Future washes Eminem in a Verzuz! [Maybe 6ix9ine would beat Eminem] depending on the generation.”

Does Charlamagne really think that “Love The Way You Lie” or “Lose Yourself” are losing in a Verzuz against “GOOBA” and “TROLLZ?” What do you think of his comments?