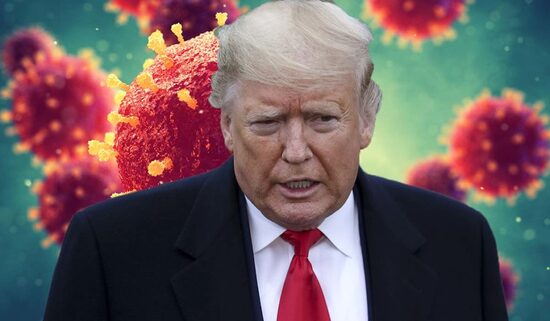 Well well well, Miss Rona Lashay Virus has finally caught your overly-tanned president slipping and in the words of the iconic Tiffany “New York” Pollard, “Do I look like I give a f*ck? Because I don’t.”

Someone forgot to tell Corona to “stand back and stand by” from Sir Orange Bottoms. Following the news that a top aide named Hope Hicks tested positive for COVID-19, it was shared that presidential hiccup Donald Trump and his first ho in the house Melania would be monitored. Not long after that was announced, Trump returned to Twitter to confirm that he had been diagnosed with the virus. This is of course laughable as Donny Boy’s response to COVID-19 has been heavily criticized as he calls it the “China virus,” said it “affects virtually nobody,” and has often been seen moving about without a mask. He’s also taken heat for holding massive campaign rallies where social distancing guidelines aren’t followed, has faced backlash for what some have said was a delayed reaction to news of the spread of COVID, and has vocalized his support in reopening businesses and schools nationwide.

“Tonight, @FLOTUS and I tested positive for COVID-19. We will begin our quarantine and recovery process immediately. We will get through this TOGETHER!” Trump tweeted. According to CNBC, White House physician Sean Conley stated, “The President and First Lady are both well at this time, and they plan to remain at home within the White House during their convalescence.” He added that President Trump will “continue carrying out his duties without disruption while recovering.”

Tonight, @FLOTUS and I tested positive for COVID-19. We will begin our quarantine and recovery process immediately. We will get through this TOGETHER!

While the responses from social media on the news varied from Trump’s band of idiot supporters wishing him the best, to others chalking it up to karma and joking about the obvious hilarity that Trump showed virtually no responsible concern for American’s throughout this entire crisis and has now tested positive himself. However, some including Destiny’s Child alum Kelly Rowland and Breakfast Club personality Charlamagne Tha God cited this as an attempt by Trump to fall back a bit as the election gets closer and debates heat up, as well as gaining sympathy mentioning the political term “October Surprise.” In American political jargon, an October surprise is a news event deliberately created or timed to influence the outcome of an election, particularly one for the U.S. presidency, or sometimes an event occurring spontaneously that has the same effect. Whichever way you feel, let’s just hope Sir Orange Bottoms gets his tracks fixed while he spends his time sitting at home in the White House for the next few weeks…hopefully for what will soon become his LAST few weeks. Peep the receipts below. Thoughts?

#DonaldTrump announced that he and #FLOTUS tested positive for Covid-19. #KellyRowland and #charlamagnethegod thinks he has a motive behind it. What are your thoughts? #NinaNews #Q955