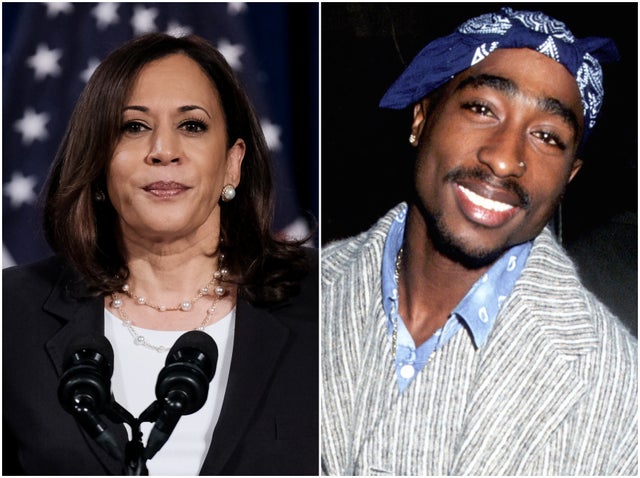 Despite passing away over 24 years ago, Kamala Harris calls Tupac the “best rapper alive.”

Kamala Harris’ journey to the White House has been met with a lot of skepticism over the years. First, she was actually running against Joe Biden to become the Democratic nominee. Then, Joe Biden, someone she was very critical of during her presidential campaign, brought her on board as his nominee for vice president.

A West Coast native, it didn’t come as much of a shock when she listed artists like Snoop Dogg and Tupac as some artists she really enjoys. However, in a recent interview, she was asked who the best rapper alive is. “Tupac,” she responded. Now, it’s been over 24 years since the rapper’s passing and many were quick to remind her, including the host, Angela Rye.

“He’s not alive. You say, he lives on,” Rye responded.

“I know, I keep doing that,” Harris said with a laugh. She continued to struggle to identify who she thought the best rapper alive was to this day, though she has plenty of options to choose from. “I mean, there’s so many. I mean — there are some I would not mention right now because they should stay in their lane,” she said.

Immediately after the bit emerged, Tupac’s name started trending on Twitter with many dragging Harris over her answer including Donald Trump Jr. “Who’s gonna tell her? If you’re going to pander at least know the basics,” Trump Jr. wrote. Rye herself immediately clapped back at 45’s son, plugging the recent interview while reminding him of what pandering really is.

Awwwww you didn’t watch the whole interview? Tupac is FOREVER for West Coast Girls. Tweet this too: https://t.co/Q7AH5oNf5j

Meanwhile, pandering is naming a Black Plan PLATINUM like a credit card…we know all the ideas are on borrowed time …like credit. https://t.co/4kHTcGEX09

The comment itself was met with reminders of Harris’ past in the legal system while others joked that she confirmed Tupac is still alive.

Kamala Harris has been getting mocked for naming Tupac Shakur as the “best rapper alive”, 20+ years after he died⁉️ pic.twitter.com/ehslNLdSCB

She was there for 2Pac even before the beginning https://t.co/fHjwRY9gqS

either Kamala Harris is out-of-touch with modern hip-hop, or………… a sitting US Senator with SCI Security Clearance just let slip that Tupac is alive https://t.co/wNBYUARcP0

Repubs talking about #tupac 2day as if they really knew/care who he was in relation to Kamala telling a joke is really irritating & if conservatives actually listened to what he said they would be awfully ashamed of themselves.. utterly distasteful. America keep your head up