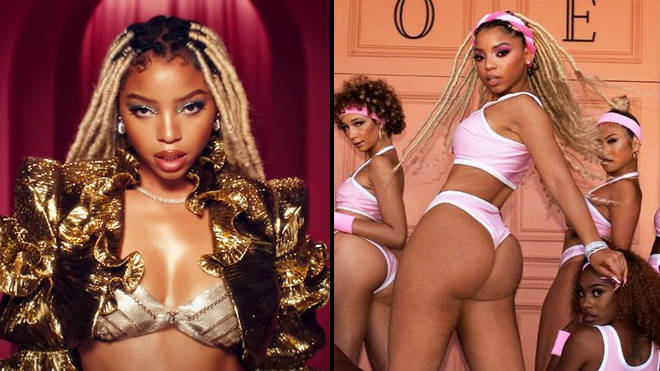 Like clockwork, often times when a confident young woman owns who she is as well as her sexuality in the entertainment business, you often get those naysayers saying they’re “doing too much” or seeking attention. Prime example of these critiques, Chlöe Bailey.

This has been a busy season for Chlöe Bailey and she isn’t slowing down anytime soon. She saw massive success with her sister Halle Bailey as the two topped the charts as Chloe x Halle, but after releasing her very first solo single, Chlöe has reached new heights. Beyoncé’s protegé recently shared “Have Mercy” and performed it live for the first time at the MTV Video Music Awards. Her steamy performance quickly went viral and Chlöe is still reeling from the warm reception that the song has received.

The singer sat down with the hosts of The Real to talk about her journey into this solo season of her career and addressed critics who complain that she is overdoing it with the sexy imagery.

“When I write and create music, it’s like, this is what I would tell myself to make myself feel better and to kind of pump myself up,” she admitted. “I love creating music with my sister and being in a group with her so doing this solo, it’s been like, I have to be like, ‘Okay Chlöe, you can do it. You’re special. Everything you have to say matters.’ So, it’s been a journey for sure.”

When speaking bout the negativity she said, “I think it’s about the support system you have around you. I have to remind myself, as long as I’m being authentic and being myself, then, that’s all that matters. People say I do too much and maybe I do, but it’s not on purpose, it’s just who I am… You can’t please everybody. Some people will like me, some people don’t. And that’s okay.”

“They’re talking, so that’s good!” Check out the clip of Chlöe on The Real below and let us know your take. Why are people so up and arms when they see Chlöe owning her sexy.. when honestly, we’ve seen much worse?