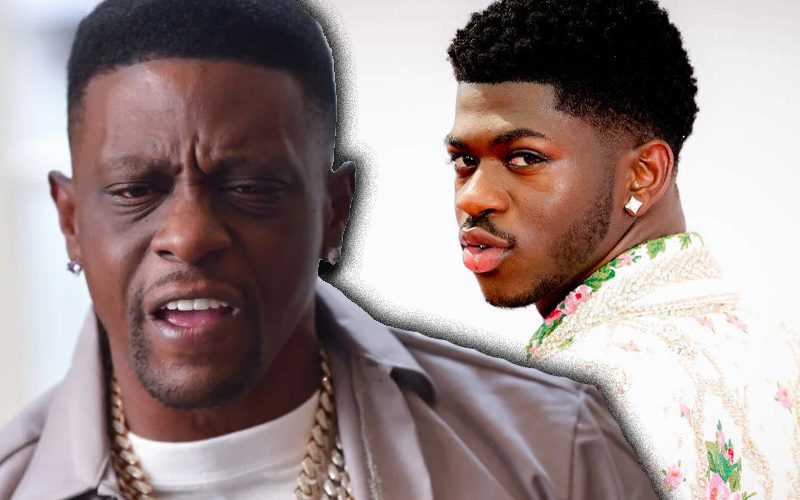 I’m seeing some people actually have the nerve to attempt to defend Boosie claiming that Nas shouldn’t have been “trolling” him, but let’s keep it a stack here… how many times has Boosie fixed his lips to speak on, attack, and even threaten to harm this man for absolutely no reason? It’s pretty safe to say that there’s something much deeper going on here than Boosie not “agreeing” with anyone being gay, look how hateful and nasty he got about someone who did absolutely nothing to him…other than “be gay.”

For the last few months now, Boosie has been occupying himself with the antics of Lil Nas X. The “Montero” rapper has been open about his sexuality and he isn’t afraid to display it in his music videos, or on social media. Unfortunately, this has brought forth a lot of bizarre criticism, including claims that Lil Nas X is trying to turn the next generation of men, gay. Boosie has been perpetuating these critiques and whenever Lil Nas X so much as opens his mouth, you can be sure Boosie will have something to say.

Today, Lil Nas X was on Instagram Live, where he decided to do a little bit of trolling in regards to Boosie. In the clip, Nas claimed that he had a song with Boosie on the way and that it was a pretty fire track. His fans understood that this was a joke, and they were laughing along throughout the Livestream.

Lil Nas X said he got a song with Boosie otw 😩👀😩pic.twitter.com/cyR9hbAwDd

One person who didn’t find this particularly funny was Boosie himself. The rapper immediately took to Twitter with a response that could very well get him banned off of the platform. As you can see, Boosie called Lil Nas X the f-slur all while telling the star to kill himself. Boosie offered some vulgar imagery here, while also claiming that no one wants Lil Nas X on this planet anymore. Clearly revealing his own homophobic demons for the 1000th time.

Nas X has never missed an opportunity to troll before, so it should be no surprise that he immediately responded on Twitter with some classic misdirection. “I am truly saddened. i have never been so mortified in my life. i can’t believe disney channel has yet to play halloween town this entire October,” he wrote.

i am truly saddened. i have never been so mortified in my life. i can’t believe disney channel has yet to play halloween town this entire october.

Boosie was immediately condemned by many on Twitter following the nasty tweet, although he is standing firm on his hatred as he has already retweeted his own tweet in the hopes that more followers see it. Needless to say, don’t be surprised if you can’t find the rapper’s Twitter account tomorrow and he’s crying about some conspiracy, given the fact that there are some very obvious terms of service guidelines that have been broken here. Take it all along with reactions below and let us know what you think.

Boosie is mad that a queer Black rapper is doing better than him in an industry that has built its foundation in homophobia.

Since Lil Boosie is trending let us all be reminded that this happened pic.twitter.com/Z61XAvZVH1

I think Boosie gotta crush on Lil Nas X cause it’s no way someone just existing can have you this pressed. https://t.co/zgG6zdWpET