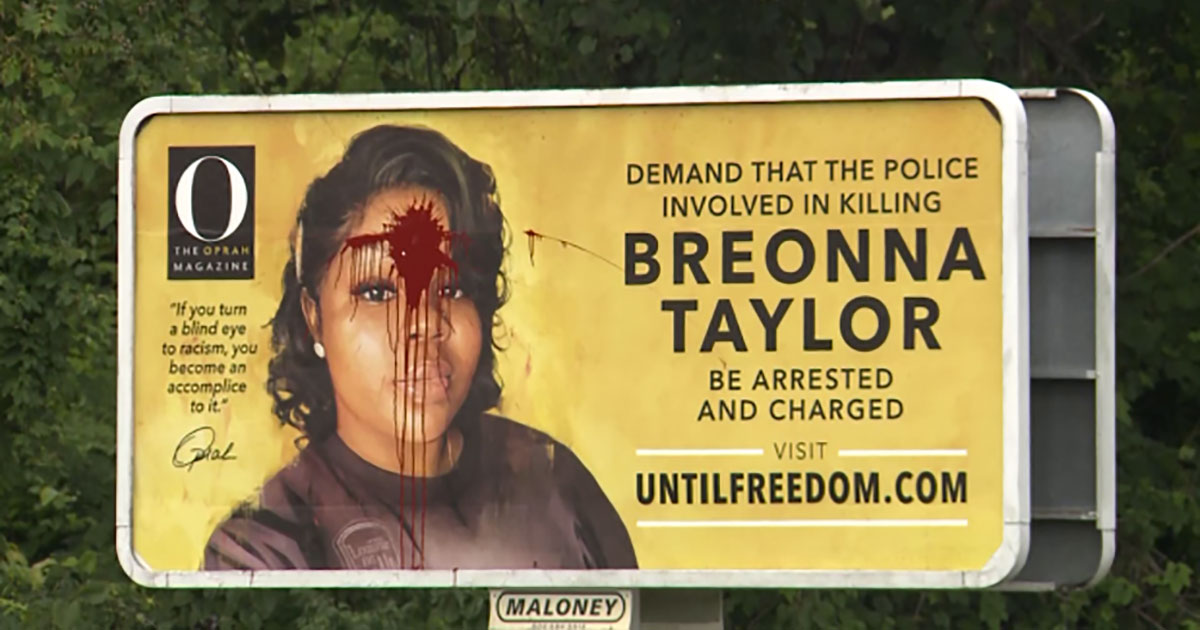 A billboard demanding that the officers who killed Breonna Taylor at her home in Louisville, Kentucky was vandalized with red paint on Tuesday (Aug. 18).

The billboard is among 26 purchased by Oprah Winfrey on behalf of her O magazine earlier this month, and it features Breonna’s face along with the statement: “Demand that the police involved in killing Breonna Taylor be arrested and charged.”

A quote from Winfrey accompanies the message: “If you turn a blind eye to racism, you become an accomplice to it.”

The red paint on the vandalized billboard—which is near the area of Lexington Rd. and Spring St. according to WLKY-TV—was strategically smeared in the middle of Taylor’s forehead, making it appear as if it were a gunshot wound.

It wasn’t immediately clear who vandalized the billboard or whether Louisville police were investigating the crime.

WLKY-TV reported that the paint was gone by around 5 p.m. though it wasn’t clear whether the billboard had been cleaned or replaced.

The billboards, which direct people to the social justice organization Until Freedom, went up all over Louisville the same week O magazine released an issue featuring Breonna on the cover, which marked the first time Oprah didn’t cover the magazine in 20 years.

Community activist Tamika Mallory, who has helped organize and participated in several protests demanding justice for Taylor, shared the vandalized billboard on Instagram asking the public to “stand with us in Louisville if you can.”

She added: “We must confront the mindset in this picture. It’s flowing from the top to the bottom. We are stronger together!”

On Tuesday, August 25, I need you all to stand with us in Louisville if you can. We must confront the mindset in this picture. It’s flowing from the top to the bottom. We are stronger together! ✊🏾💜 #OccupyKentucky #BreonnaTaylor

On March 13th, police entered Breonna Taylor’s home with a no-knock warrant and fatally shot the EMT worker while looking for illegal drugs, which were never found.

It’s been over five months since the fatal shooting, and only one of the free officers involved in Taylor’s death has been fired, and none of them have been charged.

Taylor’s family filed a lawsuit against the Louisville Metro Police Department back in May accusing them of wrongful death, excessive force and gross negligence.

In June, Mayor Greg Fischer signed “Breonna’s Law,” which bans the use of no-knock warrants and requires officers to wear body cameras when executing search warrants.

“Here at home, as George Floyd, Breonna Taylor and a never-ending list of innocent people of color continue to be murdered. Stating the simple fact that a Black life matters is still met with derision from the nation’s highest office,” Mrs. Obama said. “Sadly, this is the America that’s on display for the next generation.”

Taylor’s shooting death by LMPD officers is still under investigation by the attorney general’s office.

No timeline on a conclusion for the investigation has been provided, although AG Daniel Cameron recently said he’s still waiting to receive evidence from the FBI.