Somebody call Auntie Yonce. It was an episode of ‘Rugrats Go Wild’ yesterday when folks realized the two were dating, but Julez is now confirming they’ve since called things off.

We’ve seen it time and time again, especially with the younger generation, where after a breakup, both parties involved begin to air out their grievances on their respective social media accounts. While this often doesn’t result in media attention, the attention is a little more hawk-eyed when your aunt is Beyoncé and your mother is Solange. Daniel Julez J. Smith Jr., the 16-year-old teenage son of Solange Knowles, took to social media with some leaked NSFW evidence claiming he was in a relationship with former Disney Channel star Skai Jackson, but the two have since called things off.

In a leaked group chat message, the 16-year-old claims that he and Skai were dating and were sexually involved but she cheated on him so he got “revenge.” “I made sure to ruin her life,” the teenager allegedly wrote in one message. “I fu**ed her good and got her addicted and then left her. It’s complicated.” Another person in the conversation questioned their two-year age difference, but Julez seemed unbothered by 18-year-old Skai’s age. “Ni**a age don’t matter,” he replied. Some sources also later reported that Skai was not over 18 when the relationship took place.

While they are no longer together, another photo of the happier times for the couple leaked online as well. Julez is Solange’s son from her relationship with her high-school sweetheart ex-husband Daniel Smith. She was 17 when she married him, but the couple divorced just 3 years later.

i would pay ANYTHING to see Beyoncé’s reaction to all this going on with Skai Jackson & Juelz pic.twitter.com/EgnM6bfNDo

i really hope skai is okay and juelz gets his ass beat by solange because this is so far beyond disgusting.

Posting a sexually explicit video online without someone’s consent is VIOLENT. There is no boys will be boys. Boys will be held accountable. I hope Solange drags Juelz. I pray for Skai Jackson.

Me after seeing that video of Skai Jackson getting fingered by Juelz on my tl pic.twitter.com/vINPn1CwAe 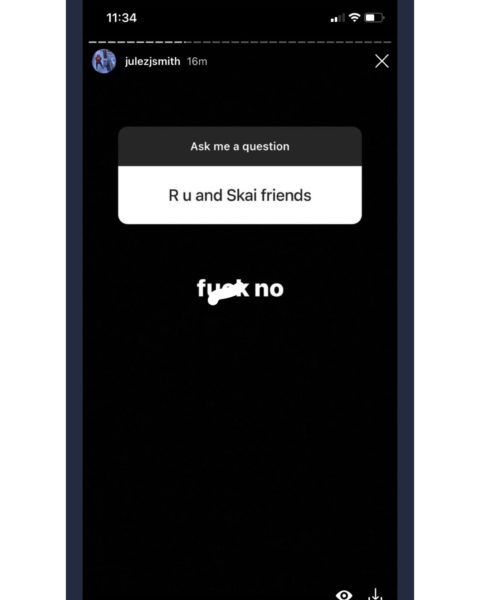