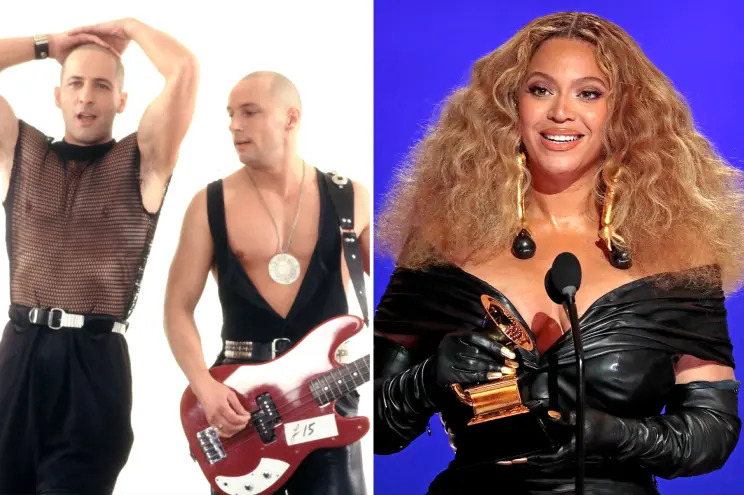 Chile, I didn’t even realize this was a sample of that. Bey once said “you know you that b*tch when you cause all this conversation,” and well… look at the material.

Back in July, Beyoncé once again reminded us that she’s 1 of 1 with the official arrival of her seventh studio album, Renaissance. The album arrived to rave reviews and impressive numbers, but as with anything great, it also arrived with a new set of haters. Before the album was even out R&B singer Kelis came out of nowhere and took to Instagram to vent her frustration toward Beyoncé, claiming she sampled her 2003 song “Milkshake” without informing her. Despite the fact that Kelis does not own her masters and Bey went through proper protocol of clearing it with the folks who do (Pharrell), Kelis was credited on the track but still felt she should have been asked and ultimately ended up being removed all together along with her sample.

Now, it seems Bey is in yet another similar situation. Right Said Fred have claimed that Beyoncé did not ask permission to sample their song “I’m Too Sexy” for her track “Alien Superstar,” and have even went as far as calling her ‘arrogant’. The British band, who released “I’m Too Sexy” as their debut single in 1991, spoke out on Beyonce’s track:

‘Normally the artist approaches us but Beyoncé didn’t because she is such an arrogant person she just had probably thought “come and get me” so we heard about it after the fact when you did,’ brothers Fred and Richard Fairbrass said. ‘But everyone else, Drake and Taylor Swift, they came to us.’

They added: ‘To use our melody they need our permission so they send us the demo and we approve it and if so we get a co-write credit. The Brit pop stars said they believe that this surreptitious sampling occurs “because there is so little money now in the actual sales, people like friends, golfing partners, engineers, bookers and the guy who brings the coke, they all want a cut.” ‘With this Beyoncé thing there are 22 writers it’s ridiculous so we would get about 40p.’ They went on to say there’s ‘nothing they can do’ and that it’s ‘best to let it go’.

“You are going to get into a conversation with someone who has a lot more presence and power and money than we do. And that won’t go well.”

Ironically, RSF’s “I’m Too Sexy” uses a sample of a Jimi Hendrix tune, which the band claims they didn’t realize until much later, whereupon they paid the guitarist’s estate for the privilege. Also, it should be added that they don’t own the tune.. and similar to the Kelis situation Bey did clear it through the rightful owners.

Take a listen to both tracks and let us know your take, should artists still reach out to the performers?