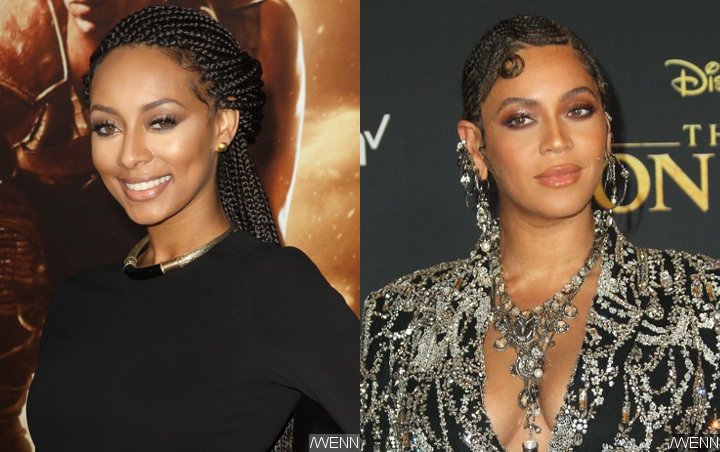 Keri reflects on the public scrutiny she faced after dissing the Queen Bey in her song ‘Turnin Me On’, claiming it wasn’t the decision that she made and she didn’t even write the lyrics.

Once upon a time Keri Hilson’s career was flourishing e her hits such as “Knock You Down” and “Pretty Girl Rock”, but it came to a screeching halt after she appeared to be smelling herself a little too much and was accused of trashing Beyoncé in the remix of her song “Turnin Me On”. Now, years after she was canceled by public for the alleged diss song, the singer has blamed her label for the backlash that she’s dealing with and the sudden setback to her musical career.

In an interview with Claudia Jordan on “Fox Soul” on Wednesday night, August 26, the 37-year-old singer said that she was forced to create the fake beef with Beyonce by her label. Noting that she was so young, in her early 20s at the time, the Georgia-born star said, “I really didn’t feel like I had a choice” than to follow the order.

As the result, Keri admitted she had to face “public scrutiny” and was “crucified” for the decisions that she didn’t make. She said that she didn’t even write the lyrics in the song in question. However, as time goes by, she said she has “learned to fight harder” for what she wants.

Claiming that she is against playing dirty and talking trash, the R&B artist realized, “No one could compare to Beyonce and that was never my aim either.” She stressed, “It was framed that way,” but she had to pay the penalty.

While Keri did score some charting songs following the attention that she gained with the Beyonce diss song, she said she wasn’t really thrilled about it. “I always did music for the hearts and not the charts,” she explained.

The backlash leveled at Keri began when she released a remixed version of her single “Turnin Me On” in 2010. In the said song, she sings, “Your vision cloudy if you think that you da best/ You can dance, she can sing, but need to move it to the left/ She need to go have some babies, she need to sit down, she fake, them other chicks ain’t even worth talkin’ bout.”

This led Beyhive to believe that Keri slammed Bey’s artistry and criticized the former Destiny’s Child member for not making room at the top for singers such as herself. While fans still let it slide at the time, she made herself a canceled figure following her appearance at the 2011 Soul Train Awards. At the time, she was asked to hold the latest issue of Juicy Magazine and give Beyonce and Jay-Z, who were on the cover, a shout out. Making her shade very clear, she pretended not to know the couple as asking, “Who’s that?”