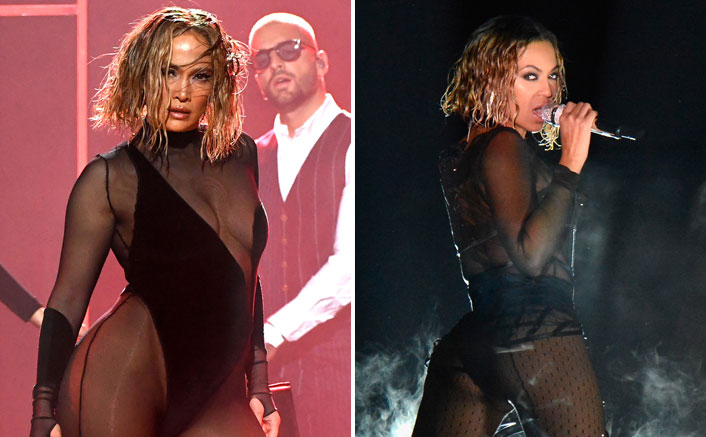 Jennifer Lopez’s latest performance is raising red flags for those with a sharp recollection of major pop culture moments.

Jenny from the Block performed “Pa’ Ti” and “Lonely” with Maluma at the 2020 American Music Awards on Sunday, and though she managed to put on a show that certainly wasn’t worthy of a heckle, many on social media couldn’t help but point out a few aesthetic similarities between Beyoncé and JAY-Z’s iconic performance of “Drunk in Love” at the 2014 Grammy Awards.

For starters, Lopez’s performance began with her seated and swathed in illusionary, vertical-line lighting. Beyoncé’s performance began about the same, except hers featured horizontal lines. Although not a ground breaking concept, Lopez’s performance similarly incorporated chair choreography and the sudden appearance of her suited-up duet partner. Lopez’s look also felt derivative — her sheer LaQuan Smith bodysuit resembling Beyoncé’s La Perla and Nichole de Carle lingerie, while her wet bob was nearly identical. It is, however, worth noting that much of the performance’s choreography, as well as J Lo’s bodysuit, also appeared in the second half of the joint”Pa’ Ti” and “Lonely” music video released in September.

In the hours that followed the award show, comparisons trickled in on social media. People on Twitter fought. Internet water coolers like The Shade Room and Diet Prada both posted about the performance and its presumed inspiration. In one of the former’s posts, a top comment read, “They performing ‘Tispy In Like,'” which is hilarious whether you’re a J.Lo fan or not.

This, of course, isn’t the first time an artist has been accused of copying, especially not J.Lo. Take a look at some of the reactions below along with the performances and let us know what you think. Do you think Lopez purposely copied Bey or is this just a case of coincidence?

Not JLo dressed the exact same way as Beyoncé did for her “Drunk in Love” performance at the Grammys. Even down to the wet hair and the chair😭

At this point JLO is a Beyonce tribute act. pic.twitter.com/Wk3scLta9l

jlo wanna be beyonce so bad, the thief striked once again #AMAs pic.twitter.com/FKdc7c8fg3

This time, the wet dog hair look from her "Drunk in Love" performance at the Grammy's. #AMAs pic.twitter.com/QQZbSeD0wR

If that Jennifer Lopez #AMAs performance looked familiar to you, you may be remembering #Beyonce at the 2014 Grammys. #JLo #AMAs #AMAs2020 pic.twitter.com/D4Wq43eNqA