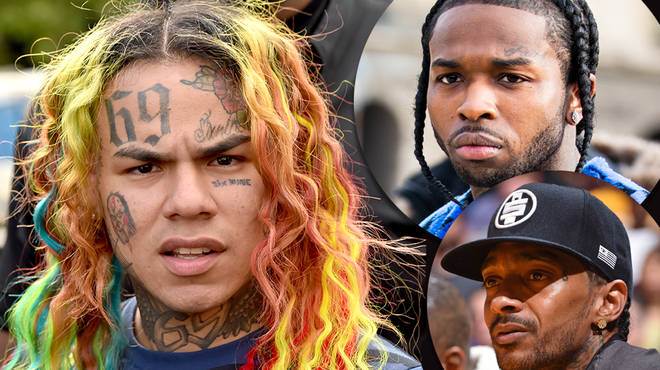 Tekashi 6ix9ine speaks on criticism about him rolling with security before disrespecting Pop Smoke, Nipsey Hussle, and XXXTentacion.

The rainbow-haired troll has basically made his entire brand off of disrespecting his fellow rappers. In his heyday, he came after people like Trippie Redd, The Game, YG, and others. This weekend, he was released from house arrest, finally being able to roam the streets without his ankle monitor. In his first Instagram Live session from his Brooklyn neighborhood, the rapper took time to address criticism against his decision to roll with tons of security, dissing Pop Smoke, XXXTentacion, and Nipsey Hussle in the process.

“A lot of people wanna say, why are you always around a whole bunch of security?” said 6ix9ine during his live-stream. “Why is your favorite rapper dead right now with bullet holes in his face? Fuck is you talking about?”

As if it wasn’t clear that he was speaking about the deaths of Pop Smoke, Nipsey Hussle, and XXXTentacion, he clarified when DJ Akademiks joined him in the chat.

#tekashi69 said on Instagram live that he uses security for protection. He references #nipseyhussle #popsmoke and #xxxtentation deaths to validate his choice. Thought? #TKSS

This is direct disrespect of Nipsey Hussle. Sickening, mocking his killer kicking him in the head 🤮 I swear anybody from ‘the culture’ who does anything with 6ix9ine 🗑 pic.twitter.com/A8JeJw71Ot