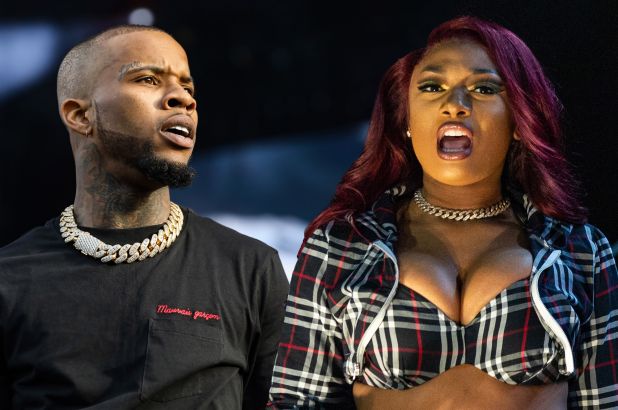 A classic case of the napoleon complex (short man’s syndrome). Instead of taking accountability or showing empathy, deny deny deny. This little leprechaun claims that Megan Thee Stallion’s team is trying to frame him and said Kehlani’s tweets against him “hurt [his] heart.”

What do you call it when someone who allegedly shoots a woman then uses that incident of gun violence to promote his music? Insensitive? Unable to read a room? Small d*ck energy? Whichever way you go, that’s exactly what little Tory Lanez has done. Pint sized rapper Tory Star took to social media on Thursday and insinuated that he would be addressing the credible allegations that he shot rapper Megan Thee Stallion this summer as she was exiting his vehicle. “To my fans … I’m sorry for my silence …. but respectfully .. I got time today …… 9 PM PST,” wrote Lanez in a tweet. Until this point, the Quarantine Radio rapper has stayed fairly silent on the incident, only speaking up to defend his streaming count, which plummeted after Megan took to Instagram Live to publicly say that Lanez shot her in the foot after Kylie Jenner’s pool party.

However when 9 PM PST rolled around, Lanez did not share his side of the story, clarify what happened, or apologize to Megan, but rather used that moment to plug his latest album DAYSTAR – a 17 track album, in which he maintains his innocence. The internet was rightfully upset that the rapper used the incident Megan Thee Stallion to promote his new album, DAYSTAR, prompting many hip hop fans to boycott the album and stream Megan Thee Stallion’s SUGA which she dropped this March instead. On Daystar, Tory repeatedly suggests that he’s innocent and is being “framed” for the shooting. On the project’s first track “Money Over Fallouts,” Tory raps, “Megan people trying to frame me for a shooting/But them boys ain’t clean enough.”

He goes on to accuse Megan of filing a false police report and insinuates that they were in a relationship. “Girl, you had the nerve to write that statement on the affidavit / Knowin’ I ain’t do it but I’m comin’ at my truest / Tryna keep this shit 200 with you,” he raps. “Don’t forget you was my bitch / I held it down and kept it real / I would never paint no fake picture of you just for some mills.” He adds, “Look at how you doin’ me / People tryna ruin me / And what’s even worse is I’m still thinking about you and me.”

Megan was shot multiple times in her feet, but Tory questions her claims. “How the f**k you get shot in your foot? Don’t hit no bones and tendons / How the f**k your team is tryna paint me as some whole menace?” he raps. “I just lost like $10 million dollars because this cold business / But I got like 10 million followers that gon’ roll with me … I don’t give a damn if shawty know Jigga.”

He also seems to deny that he harmed her. “I would never put you in no danger and if I did, you would’ve said it when you seen the cops.” And that’s just the first track.

On “Queen And Slim,” a likely reference to the Melina Matsoukas-directed 2019 film, Tory takes it back to earlier in the night of the shooting and brings up hanging with Megan and Kylie Jenner prior to things going south. He also raps about having a “crush on Kylie.”

“Me and Kylie still off in the pool/We was chilling, kicking shit, was cool/Both of us didn’t know you was tripping/Even though I got a crush on Kylie, I woulda left with you if I knew you was dipping for the simple reason/You invited me but I can’t act like shawty didn’t excite me/I had took a wrong turn that-night…I wasn’t the wrong one that night, you was just too drunk to even see it/Wasn’t anticipating, I’d never put you in no situation/I’ve never even had an argument with ya/ Conversations, I’m all bargaining with ya, cause you was my n**ga for real/And if you can agree, then you owe me that.”

He also seemingly addresses his relationship with Megan on “Friends Become Strangers.”

When does it get strange?/When you start lyin’ to your best friend about us/And hopin’ she ain’t entertain?/Or is it strange when the lovin’ come with secrets and the games/When the world unveil your curtains and all they laughin’ at’s your pain/But does it change when we both reveal that both our mothers died/We still dealin’ with some pain and need someone to entertain/Or does it change when you break down in my arms and start cryin’/Feelin’ like you alone and I tell you, “Everything’s okay’. […] Will we ever talk about this?/Will we ever console again?/Or will we keep on actin’ like I put you in danger and some pain?”

On top of all that, Tory took time to call out the multiple people that have sided with Megan in the incident, such as Kehlani, Kaash Paige, and others. Last month, Kehlani explained why she was removing Tory from the deluxe edition of her album It Was Good Until It Wasn’t.

“I got nothin’ but love to spread, but n**gas hate me/Hurt my heart to see them Twitter fingers come from Kehlani’s and Kaash Paige’s,” Tory raps on “Money Over Fallouts.” Take a listen below as well as view some of the internet’s reactions below. What do you guys think?

Tory Lanez really dropped a whole diss album about Megan like he on Empire pic.twitter.com/HmlrOfEp4f

Tory lanez so damn narcissist he is unaware that this whole album confirms that Megan was telling the truth when she said he was telling blogs stuff. Every song is basically everything that was written in the blogs. pic.twitter.com/AxdEBNyPQx

some of y’all on here justifying tory lanez shooting miss megan because you like the sound of his lil music notes…after just posting “protest black women” in those lil flowers and bubbles collages?? pic.twitter.com/1Si8U4L1PN

So Tory Lanez is saying that Megan’s people framed him AND that he’s still in love with her and wants her back???? pic.twitter.com/6EmfJSHfuj

so Tory Lanez decided to shoot Megan and drop an album to capitalize off of an assault that HE DID,,,,Toronto men are a different level of slimey fr pic.twitter.com/iZwPeLK2rt

There’s video of Tory on the ground with police while Megan stands wounded. She posted graphic pics & said he did it. Pending court date.

And all it took was Tory Lanez to drop a wack album moistly yelling over Soundcloud beats for yall to turn. Y’all REALLY do hate Black women. pic.twitter.com/NiFXiJxmtn

Tory Lanez on his live: Megan, I just wanna take this time to publicly apol-