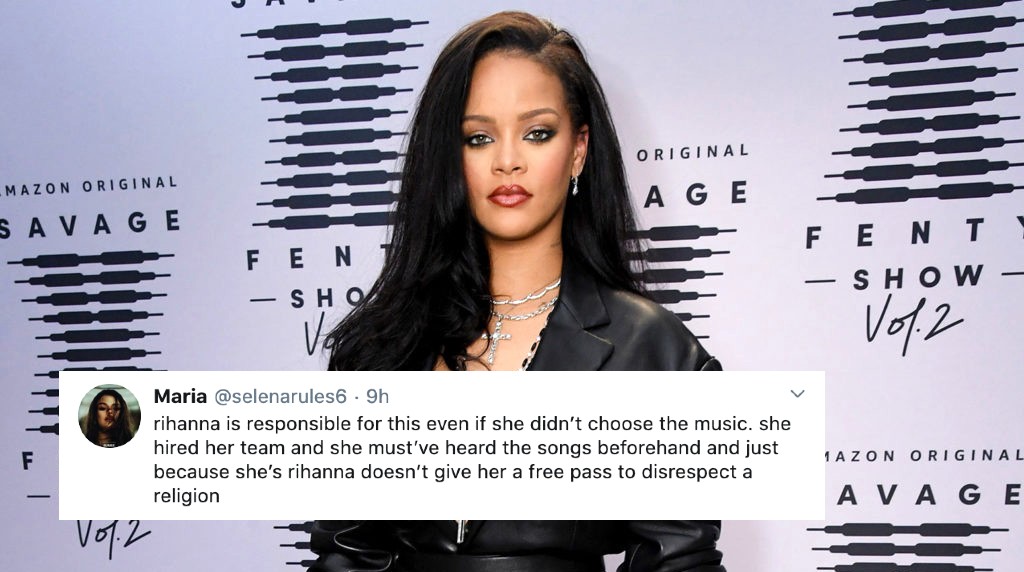 Another day, another story of folks attempting to “cancel” somebody. Rihanna’s use of a song during the Savage X Fenty fashion show is landing her in hot water with some of her Muslim fans accusing her of cultural appropriation.

It’s generally pretty hard to make it to the top without pissing some people off. Celebrities get under people’s skin all the time, resulting in “cancel culture” becoming a major thing in the last few years. It has rarely worked but, sometimes, those attempting to cancel an artist or public figure have a point. During her latest Savage X Fenty fashion show, which featured stunning looks from her brand ambassadors, including Willow Smith, Rihanna came under fire for one of the songs played during the event, being accused of culturally appropriating Islam by playing a version of a hadith.

there’s really no way we can let this slide like a straight up HADITH???? rihanna baby you screwed up HARD pic.twitter.com/gxUOvtHGn5

According to Newsweek, hadiths are “highly revered records of the traditions or sayings of the Prophet Muhammad”, which are understandably sacred to Muslims around the world. The song played is called “Doom”, performed by London producer Coucou Chloe, who previously explained her use of the vocal sample.

“For those who were wondering what were the vocal samples – I didn’t make the vocals on this one as you can easily guess,” she reportedly wrote about the song, which was released several years ago.

Regardless of Rihanna’s intent behind the use of this song, which was likely simply not being aware that it could be seen as offensive, the star is being picked apart by her Muslim fans for using this specific track, which reportedly uses a hadith about the “end of our times”. People are calling the move Islamophobic, accusing the Bajan beauty of cultural appropriation.

Thus far, Rihanna has not responded to the controversy. Take a look at the reactions below? Do you think folks are overreacting or is irresponsible on Rih’s part? My thing is perhaps it can be seen as insensitive to someone of that religion and we can’t discount that simply because it isn’t our own. However, I also don’t think it’s something Rihanna would have done intentionally as many of us would simply be ignorant to the songs origins.

i feel like islamaphobia is so normalised to the point where people are calling us dramatic for being mad when our religion gets disrespected? hadith are sacred words of the prophet, they’re used to guide muslims & are second to only the Quran. rihanna should know better.

i can’t let Rihanna have a pass w appropriating Islam like for her first show the models wore a scarf around their heads and it looked like HIJAB and her second show she used a track that remixed a HADITH….why is no one talking about this, my religion is not y’all’s aesthetic

it’s really sad that i don’t even wanna speak on what rihanna’s show did with the Hadith cus i know y’all will NOT care cus it’s about Islam.

Rihanna is messed up for using a song with a Hadith in it to play at her LINGERIE show. What is up with artists using Islam as an aesthetic?? Have some respect.

as a muslim, no words can describe how disappointed i am with Rihanna for letting her models dance to hadith. Hadith are the sacred words of our prophet, you can't just use it for your lingerie show. disgusting and extremely disrespectful

Rihanna can fu*k right off, using Islamic Hadiths which we regard as holy as a background to their music video, does my religion look like an aesthetic to you. Why’s no one speaking about this?