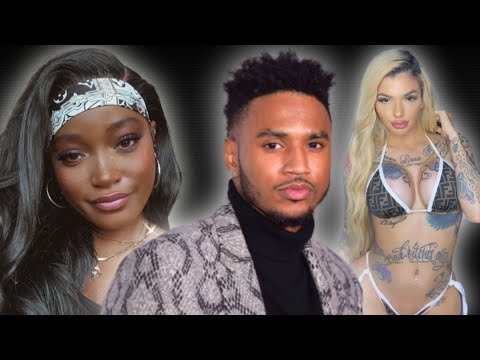 Mr. Steal Yo Girl seemingly couldn’t care less about the sexual misconduct allegations against him of becoming Mr Robert Kelly Pt 2, showing the world that as he kicked back and got a foot massage in the midst of it all.

Trey Songz is acting all kinds of unbothered following his sexual misconduct and sexual assault allegations this week. The singer, who has been accused on several occasions of holding women hostage in hotel rooms for the entire day, throwing their belongings off of the balcony, and even urinating on women without their consent, issued a response to Celina Powell and her friend Aliza, who claimed that he had done some pretty horrible things to them on the No Jumper podcast and, subsequently, on Twitter.

I usually stay quiet on this but I feel that in many ways the movement to fight for the women who actually have suffered harassment and abuse on various levels, has been hijacked by those who find it convenient for themselves to come up as they seek to destroy someone’s life.

Following his “proof of receipts,” which didn’t really show much other than the fact that he’s a shitty texter, allows white women to refer to him as the n-word, and gets his salad tossed on occasion, he is now trying to forget about everything that has come out in the last week, getting a foot massage and unwinding.

Trey is really trying to give off the vibe that he doesn’t care what these women are saying about him, despite the fact that people like Keke Palmer and Bebe Rexha have also come forward with their own allegations about him. Granted, Celina Powell and anyone who associates with her is certainly not a reliable source for ANY type of information, when multiple people who have nothing to gain (ie: Keke Palmer and BeBe) share similar stories…that’s where things become alarming. On Instagram Stories, he kicked back in his home and took a video of a woman massaging his feet.

#PressPlay: Looks like #TreySongz was kicked back and unbothered after he took the time yesterday to address some allegations against him!!

With the number of allegations against him, you would that he might consider a break from social media so he could address the topic formally. But, alas, here he is getting a foot massage on the couch while the world wonders. What do you think of all of this?

#treysongz seems unbothered from yesterday’s shenanigans, as he gets a foot massage from a beautiful woman. pic.twitter.com/m44tH4Tz8O

#ICYMI, #KekePalmer tweeted this while the internet dragged #TreySongz. . Many years ago, she accused #Tremaine of sexual intimidation after he included her in a music video against her wishes. . . . . . . . . . #Adam22 #NoJumper #AyyyeJae #CelinaPowell

Trey Songz been doing this even to Bebe Rexha she literally said it herself so no I don’t think the women lying especially keke Palmer pic.twitter.com/L6inUDr918