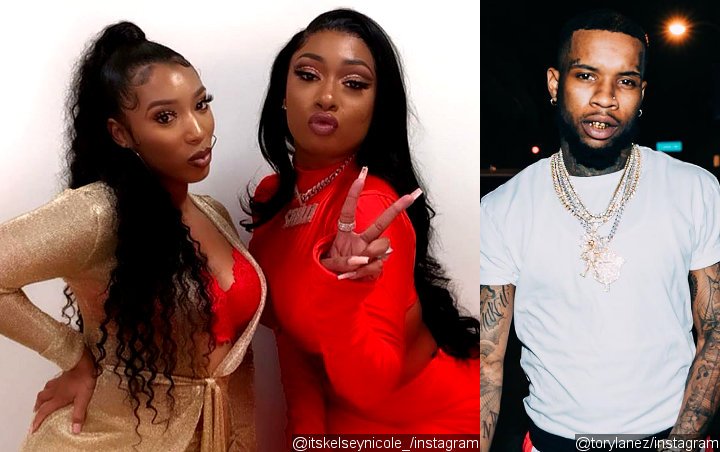 Imagine how tired we are? Kelsey was seen at a party with Meg’s label head and the Rap-A-Lot Records founder as they spoke about “respect and loyalty.”

Her relationship with Megan Thee Stallion remains a mystery, but it’s clear that Kelsey Nicole still has ties to the Houston Hottie’s record label. There have been rumors that Megan and Kelsey, once thick-as-thieves best friends, were no longer speaking following the July shooting incident involving leprechaun king Tory Lanez. Megan and Kelsey reportedly no longer follow each other on Instagram, and another one of Megan’s friends called out Kelsey for remaining silent about sharing her side of the story regarding the shooting controversy.

On Instagram Live, Kelsey recently said that she’ll soon give her account of what happened that fateful evening, but she added that she doesn’t feel obligated to tell the public anything at the moment. She popped up again in a video that Carl Crawford, head of Megan’s label, 1501 Certified Entertainment, posted to Instagram with Rap-A-Lot Records founder James Prince.

“There’s two things that is earned and cannot be bought. What is that?” Kelsey asks as she looks at Prince before he answers. “Respect and loyalty.” Kelsey was all smiles as she stood between Crawford and Prince in the clip, and many came down on her because it’s well-documented that Megan is at odds with her label.

This entire controversy had been a wild ride, but it seems that there is much more to be told. Kelsey got on Instagram Live to speak about the video and addressed folks bringing up how she once defended Megan heavily against those same men. “That was my friend, of course, I’m gonna defend her.” Check out both videos below.

#PressPlay: #KelseyNicole went live for a hot second to address the video with #CarlCrawford! (SWIPE)

No matter what y'all say about Megan, she deadass still has the same group of friends she always had, still hang out with the same girls admist making new friends & kelsey feeling some typa way so hanging out with men that threatened meg before, that's grimy.

Kelsey is pathetic and was never megan real friend! 3 snakes together 🐍🐍🐍 pic.twitter.com/aHIjKOozra

Why u hoes move funny once y’all stop being friends with someone? Wtf is Kelsey doing with ppl Megan don’t fck with lol. That shit is lame.

Was Megan solid when she’s been having y’all bully Kelsey online 🤔 y’all say all of this but ain’t been solid a day in your life. Ass licking a celebrity is not being solid boo. https://t.co/JZnDNq98T6

So Kelsey was Megan's bestfriend, I mean joined at thee hip. But soon as they fall out for whatever reason, she's wearing a 1501 chain AND hanging out with them? AND MEGAN IS THE PROBLEM? L M A O

Y’all saying loyalty but was Megan loyal to Kelsey? She slept with Tory behind her back, got people thinking Kelsey might have shot her and has had her friends threaten Kelsey and bully her online 🤔 y’all just mad cause you know Megan lied about that night