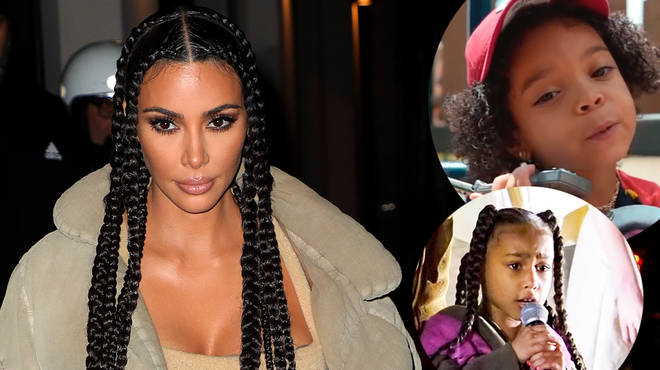 It really seems like folks are permanently ready to be mad at every move a Kardashian family member makes and apparently not even 6-year-old North West is exempt.

We’re sure nobody woke up yesterday and expected to be witnessing a public beef between two toddlers, yet here we are! This was about to become the youngest and strangest rap beef in hip hop history. North West made a fun musical debut at the Yeezy Season 8 fashion show by rapping her version of pint-sized star ZaZa’s “What I Do.” After the video went viral, ZaZa’s parents took to Instagram to write that the Wests should have given credit to ZaZa because they used her original song for their upscale event. It was a criticism that Kim Kardashian West saw and addressed on social media swiftly.

in July of 2019, ZaZa & her dad went into the studio for the ultimate experience! To finally begin making the music she wanted to make. We take PRIDE in creativity, and believe whether a child’s involved or an adult… creativity deserves RESPECT/homage! What @kimkardashian (Kanye west) are doing with their daughter… with the inspiration of ZaZa & our family in mind is okay… we not mad BUT . . PLS SHOW LOVE AND SUPPORT TO THE ORIGINAL FIRST!!! We admire Kanye west, and adore his journey. However, we don’t wanna feel like our daughter’s journey in the world of entertainment is being STIFLED . . THANK YOU! 💕 . . #ZaZaChallenge #WhatIDo #ThatsANoNo #ZaZa #BlackGirlMagic #blackgirlsrock #HypeKids #hypebae #redcarpetgirlz #explorepage #viral #yeezyseason8 #kanyewest #kimkardashian

ZaZa’s viral hit “What I Do?” was released last summer and has garnered over 13 million views since then. North put a clever twist on the song for her performance — it still feels wild typing that! — sampling the infamous “What are those?!” line for her remixed version. ZaZa’s parents didn’t see the move as disrespectful exactly, but given the huge platform they seemed to be upset that Kanye or Kim Kardashian didn’t give any acknowledgement toward where or who North’s version was inspired by. “We admire Kanye west, and adore his journey,” one of ZaZa’s parents wrote for her on IG, continuing by adding, “However, we don’t wanna feel like our daughter’s journey in the world of entertainment is being STIFLED.” Per usual, this of course prompted many folks who really don’t give a damn about ZaZa or her song but took North basically doing karaoke to a song she likes as another opportunity to accuse Kim of “stealing.”

Kim didn’t let it go on too long. “We love you, North is a huge fan and records in the studio all the time with her dad and is inspired by ZaZa and loves Lay Lay too!” the reality star commented. “Todays performance of North’s remix of ZaZa’s song was something she asked to do at the last minute and a complete surprise. I didn’t mean to not give credit where credit was due. Would love for the girls to meet soon.”

Later, Kim continued her credit-giving on Twitter. “I’m so proud of my Northie!!!!!! Her 1st performance had me in tears!” Kim wrote. “She had an impromptu performance on stage at her dads Yeezy Season 8 fashion show! Shout out to Zaza!!! @redcarpetZaZa North hopes you like the remix!!!” We wouldn’t be surprised if these two kids made a real collaboration for the remix to this record. Check out the receipts below, and let us know if you think this is all just an innocent misunderstanding or is North West and the Kardashian clan wrong for not giving credit where it’s rightfully due:

I’m so proud of my Northie!!!!!! Her 1st performance had me in tears! She had an impromptu performance on stage at her dads Yeezy Season 8 fashion show! Shout out to Zaza!!! @redcarpetZaZa North hopes you like the remix!!! pic.twitter.com/f9Zas0OLlz

North West’s parents took ZaZa’s “What I do?” Beat and had her record over it and she has performed it many times now. With zero acknowledgement to ZaZa…..I’m so sad this is what they’re doing. https://t.co/DVywdxtU3N

North West pulling a jacquees. But we know who her mother is so…. SUPPORT ZAZA💕 pic.twitter.com/vkbD5dDtuq

The West family recording North on Zaza’s beat with zero acknowledgment is so very Kardashian of them.

Grown Ass Niggas is really pressed that North West performed a remix of Zaza’s song. Obviously she fucking likes Zaza’s song. She probably just wanted to express herself over it so Ye just remixed the beat to make the process simple for her. She’s a fucking kid…

The rap performed at Kanye’s show is by a little girl named Zaza (redcarpetgirlz). Not North West. When called out @KimKardashian said it was an alleged “surprise & last minute” performance North wanted to do. 🙄 We don’t buy it. #hghltthis #blackgirlmagic pic.twitter.com/5UKPafDSHs

Lol, it's a good thing the Interwebs are here to gather 'thieving' Kim Kardashian and Kanye West…otherwise little star ZaZa wld not have gotten a shoutout or hee flowers for her song that North supposedly remixed. Lol

I hope ZaZas parents sue tf out Kanye and Kim, they are always quick to claim someone has stolen from them when they are thieves themselves and the best form of apology or grievance they could offer was for ZaZa to meet North West…. like what kind of shit.

I don’t see the problem between ZaZa and North West. North just looks up to her. Their just kids.🤷🏾‍♀️