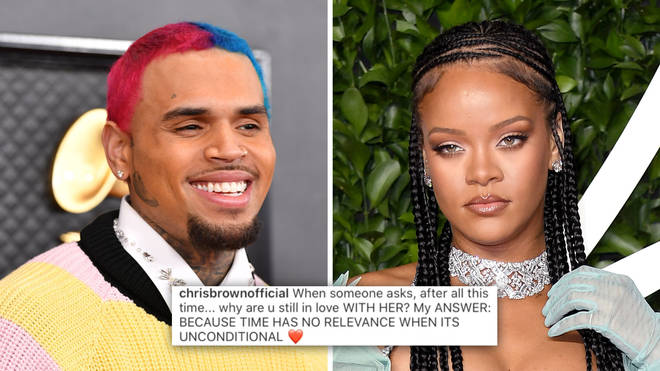 Chris Brown stirred the pot on Instagram with a mysterious message that sent his fans into a tizzy. The famed singer has been enjoying the dad life as the father of two has continuously shared photos and videos of his five-year-old daughter Royalty and his newborn son Aeko. At Sunday’s (January 26) Grammy Awards, Chris brought his little girl as his adorable date. They stole the show as they posed on the red carpet where Brown also flashed his new hand tattoo in honor of Aeko.

Meanwhile, over on C. Breezy’s Instagram page, the entertainer left fans gossiping after he shared an enigmatic caption to his post. He uploaded a video that showed himself smiling flirtatiously during an interview and wrote, “When someone asks, after all this time… why are u still in love WITH HER? My ANSWER: BECAUSE TIME HAS NO RELEVANCE WHEN ITS UNCONDITIONAL ❤️.”

At first, Chris kept the comments open but after thousands came in within minutes, he shut his comments off. It didn’t take long for the singer to delete the post altogether, but that didn’t keep people from speculating about who this mysterious “her” is. People believed that Brown and Ammika Harris have been in a relationship as he’s shared loving messages about Aeko’s mother on his social media pages.

Yet, this new puzzling caption has caused the public to believe that he’s talking about his on-again-off-again ex-girlfriend Rihanna who is newly single following her split from billionaire Hassan Jameel. There’s also Karrueche Tran who is in a relationship with Victor Cruz. Tran and Brown dated on and off from 2011 to 2015 and reportedly split after Tran learned that Brown fathered Royalty with Nia Guzman. Check out his post below. Who do you think Chris is referring to?

#ChrisBrown with a post & delete that says, still in love with “her.” Who y’all think “Her” is?