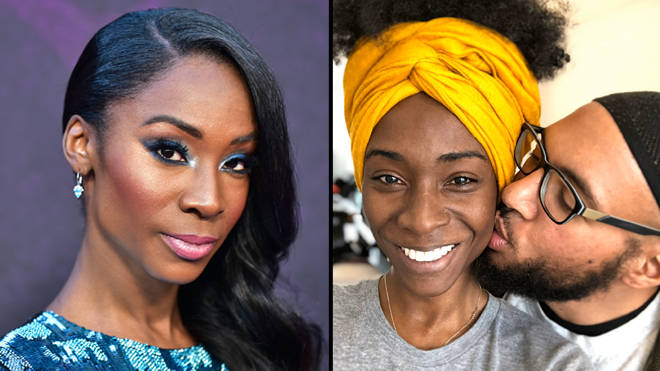 “Pose” star Angelica Ross found out that her new boo has had a secret fiancée and child all along, so she decided to put him on blast via Twitter.

“Pose” star Angelica Ross is not afraid to admit that she got played by the man she’s be seeing, as she revealed to her thousands of Twitter followers that his secret fiancée, who is also the mother of his child, had reached out to her. The American Horror Story actress was head over heels for her new boo just two days ago, but things quickly took a turn when she found out he was engaged to be married to another woman. On Wednesday morning, Angelica posted some photos of herself posing with her mystery man on Twitter.

Finally found him and have to distance myself from him 😫 an early test we’re committed to passing. I miss you B❣️😷 pic.twitter.com/yTIiLQlVld

“Finally found him and have to distance myself from him,” she wrote. “An early test we’re committed to passing. I miss you B.” The following day, however, she quote-tweeted the post to share some surprising and unfortunate news.

The internet is AMAZING. I’ve been talking to the mother of his son and fiancé all morning. #PlotTwist! https://t.co/6osdc0IlDK

“The internet is AMAZING,” she exclaimed. “I’ve been talking to the mother of his son and fiancé all morning. #PlotTwist!” While Angelica didn’t call either of them out by name, she did elaborate on the situation a little further. The actress retweeted a reply that explained what likely happened.

“For those who don’t get it,” the reply reads. “Queen Angelica found this man and was dating. She posted this on Twitter and we all REJOICED in excitement. Twitter FBI probably saw the tweet and told Angelica this man has a kid and is engaged. Angelica was talking to his fiancé all morning.” Angelica co-signed this explanation, writing, “Basically,” in response. While she was initially going to go live on Instagram to “spill the full tea,” she decided against it after realizing that she was “not in any condition” to do so.

Think I might just spill the full tea on my IG live tonight. With a bottle of…[insert sponsored drink] pic.twitter.com/vj72z1vr8y

After talking with my girl @KingAmiyahScott, I realize I am not in any condition to go LIVE on my IG tonight. Going to pray about it instead. pic.twitter.com/BINlDCNkw0

After seemingly wrapping up her rightfully petty response to the situation by posting a screenshot of Robyn’s “Call Your Girlfriend,” Angelica felt the need to defend herself against those who were judging her. “Guess I still haven’t learned,” she tweeted. “Maybe this time will teach me.”

Guess I still haven’t learned. Maybe this time will teach me.

You might think I’m careless with my heart, but I’m not. I’m filtering an obscene amount of guys just to give ONE the time of day. I never slept with him. I thought it was going to be special. Back to focusing on keeping my house in order.